Home » News and events » Events » Anti-corruption and its discontents

Anti-corruption and its discontents 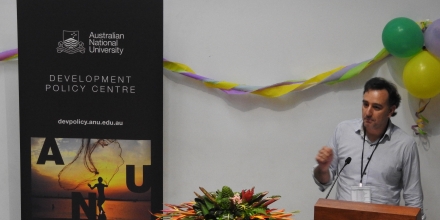 Anti-corruption and its discontents: local, national and international perspectives on corruption in Papua New Guinea

There has been a rapid scaling up of anti-corruption initiatives since the mid-1990s, and anti-corruption programs are now a core part of development policy and practice. A new book by Development Policy Centre Research Fellow Grant Walton examines the relevance of anti-corruption discourse in Papua New Guinea (PNG), one of the most culturally rich and ‘corrupt’ countries on earth.

Grant Walton is a Research Fellow at the Development Policy Centre, ANU. He received his PhD from the University of Melbourne. Over the past decade Grant has conducted research in PNG, Liberia and Afghanistan. He is also Deputy Director of the Transnational Research Institute on Corruption, and a Research Associate of the University of Birmingham’s Developmental Leadership Program.

Sam Koim is a Papua New Guinean lawyer whose career has focused on anti-corruption efforts. He was a Principal Legal Officer at the PNG Department of Justice and Attorney General, before becoming Chairman of Investigation Task-Force Sweep, PNG’s multi-agency anti-corruption body. He is currently a Visiting Fellow at the Development Policy Centre.