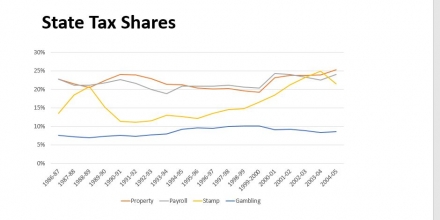 This event was by invite-only. PowerPoint slides and the audio recording are available in the ‘downloads’ tab above.

In 1995, John Howard, the newly elected leader of the Opposition, reflecting on the Coalition’s loss of the 1993 federal election on the back of the Labor government’s goods and services tax (GST) scare campaign, said ‘never ever’ for a GST. However, a year later, when the Coalition was in government, the case for reform was compelling, with Australia’s indirect tax regime at both the Commonwealth and state levels in poor shape. Tax reform would once again feature in the early years of a long-term government. This paper starts with a discussion of the early 1990s battle of the plans between John Hewson’s Fightback! and Paul Keating’s One Nation but then focuses on the Howard–Costello government’s tax reform plan, in particular 1998’s A New Tax System (ANTS), with its centrepiece GST, and the related Ralph Review of Business Taxation.

Paul Tilley brings long-standing experience on tax and public finance from his 30-year public service career in Treasury, the Department of Prime Minister and Cabinet and the OECD. Paul has since published a book on the history of the Australian Treasury, teaches a tax policy course at Melbourne University and is currently writing a series of papers on the history of tax reform in Australia. His research and experience is of great relevance to TTPI’s activities.