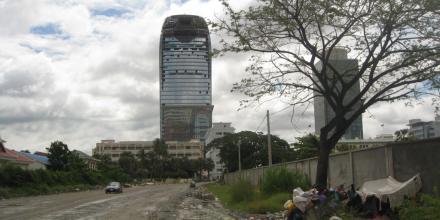 This talk examines the ongoing pattern of violence utilised by municipal authorities against homeless peoples in Phnom Penh as part of a gentrifying process that the local government has dubbed a ‘beautification’ agenda.

Of particular concern is how city officials have begun actively promoting the criminalisation of the urban homeless and poor through arbitrary arrests and illegal detention, holding them in ‘re-education’ or ‘rehabilitation’ centres. Yet these centers are not what they seem, where such euphemisms attempt to mask the systemic abuse of marginalized peoples who are unwanted on the streets of the capital city as they are deemed to present a negative image for Phnom Penh.

Simon Springer is an Associate Professor in the Department of Geography at the University of Victoria, Canada. His research agenda explores the political, social, and geographical exclusions that neoliberalisation has engendered, particularly in post-transitional Cambodia, where he emphasises the spatialities of violence and power. Simon’s books include The Anarchist Roots of Geography: Towards Spatial Emancipation (University of Minnesota Press, 2016), The Discourse of Neoliberalism: An Anatomy of a Powerful Idea (Rowman & Littlefield, 2016), Violent Neoliberalism: Development, Discourse and Dispossession in Cambodia (Palgrave Macmillan, 2015), and Cambodia’s Neoliberal Order: Violence, Authoritarianism, and the Contestation of Public Space (Routledge, 2010). Simon serves as a co-editor of ACME: An International E-Journal for Critical Geographies and for the Transforming Capitalism book series published by Rowman & Littlefield.