Home » News and events » All stories » A case study in failure? 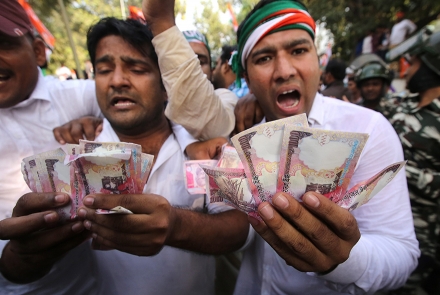 A case study in failure?

India’s demonetisation was meant to flush out black money, but was instead a flop that spurred illiberal instincts, Ramesh Thakur writes.

On 30 August, the Reserve Bank of India (RBI) published its annual report. Buried on page 195 was the revelation that following demonetisation in November 2016 – the primary justification for which was to flush out black money – 98.96 per cent of the cash (Rs15.28 trillion of the Rs15.44 trillion total) had re-entered the banking system.

Of the remaining one per cent, a substantial portion is likely to be accounted for by the 25 million overseas people of Indian origin, who kept modest amounts within the legally permitted limits as handy cash on arrival for their visits back to India.

They – we – were denied any realistic opportunity to exchange the old worthless currency for the new legal tender and simply threw it away as rubbish.

The cancellation of 500 and 1,000 rupee notes as legal tender took 86 per cent of the money in circulation out of the economy, inflicted considerable pain and distress on the poorest labourers in the casual workforce, caused major inconvenience to millions, and has little lasting gain to show for the shock to the economy.

The general secretary of one of the communist parties, Sitaram Yechury, claimed that “hundreds of people” died in queues waiting to change their old money into new legal tender, whereas a Times of India report put the death toll in the queues at between 80-110.

According to Vivek Kaul’s analysis for the BBC, “As per the RBI data, it’s safe to say that demonetisation has been a failure of epic proportions.” Former Finance Minister P. Chidambaram tweeted: “Shame on RBI which ‘recommended’ demonetisation.”

The sectors hit the hardest were agriculture, the rural economy and real estate. Worse, it highlighted the prime minister’s susceptibility to quack economists and his unsuspected instincts for the state controlling the economy. The main opposition party Congress demanded an apology from Prime Minister Narendra Modi for having “unleashed financial anarchy” and perpetrated a “fraud” on the people.

Finance Minister Arun Jaitley rather limply countered that critics did not understand the objective of demonetisation.

Perhaps he should go back and read what Modi had to say at the time. The shock to the economy was described as a surgical strike necessary to curb black money, counterfeit currency and terror funding. Not one of the claims withstands scrutiny. RBI figures show that the counterfeit currency detected went up by 20.4 per cent and GDP growth declined by nearly 2 per cent.

The final refuge of the prime minister in defending what had seemed like a good idea at the time was that it would move India towards becoming a cashless economy. The Indian Express has published a good analysis identifying the shifting goalposts as one by one the justifications were discredited.

But the move paid rich political dividends. In a country long inured to poverty, the pain was taken as proof of the strength of the economic medicine and the Bharatiya Janata Party (BJP) narrative of pitting the poor against the rich, and the honest against the dishonest, helped it gain a spectacular victory in the elections in Uttar Pradesh, India’s largest and politically most consequential state, in March.

The decision to demonetise is destined to become a classic case study in coming years of the government riding roughshod over people’s property rights to cause immense hardship for no appreciable gain and considerable economic loss.

People were told when they could access their own money, how much, and ordered to go digital, or else. Single young women had limits placed on their personal jewellery. Visitors to the country could exchange a maximum of 5,000 rupees per stay (not per day) at their hotel cashier. That is just US $75!

Demonetisation resonated with the people because the rhetoric used to introduce and justify it was an assault on black money. Mass financial illiteracy means that very few people seemed to know that only 6 per cent of illicit wealth is held in cash.

Consequently the move remained popular, and continuing political popularity in turn further emboldened the intolerant elements in the BJP’s social support base. They began to openly impose moral boundaries for all Indians with regard to dress, diet, faith and patriotism. The signs turned ominous of a tendency towards totalitarian government by official decree, as an accompaniment to lifestyle choices dictated by Hindu nationalist zealots.

Lest this sound unnecessarily alarmist, consider some high profile cases. People were beaten up in public and lynched under suspicion of transporting, storing and eating beef, anathema to devout Hindus. Others were assaulted and charged with sedition for failing to stand up for the national anthem in a cinema hall. Authors of articles critical of the Modi government, including this author for asking if Modi wants to turn India into a Hindu Pakistan, are trolled by the so-called Modi bhakts (Modi worshippers). Social media is used to direct hate traffic at the undesirables, with suggestions that elements of the BJP may be the organising force behind this.

A less exuberant ruling party and prime minister in New Delhi, following confirmation that demonetisation was a policy debacle and a human calamity, might be just what the good Dr Manmohan Singh, the former prime minister, ordered. With some luck, Modi might even learn the wisdom of avoiding quack economists and nationalists whose policy prescriptions do immense damage to the nation’s economy, society and people.