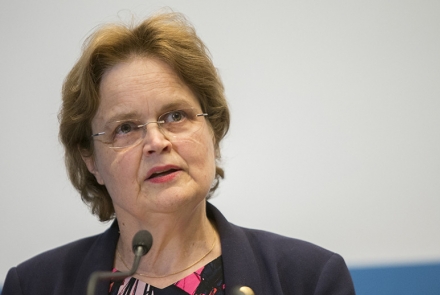 Secretary of the Department of Foreign Affairs, Frances Adamson, has hailed the ‘Game of Thrones effect’ of strong female characters in leadership positions, saying she is confident it will help inspire the next generation of female leaders in the male-dominated field of international security.

“Over the many controversies of its seven seasons, Game of Thrones draws a long bow to illustrate a nuanced transition,” Ms Adamson said.

“It starts with a highly sexist world where women can expect to be shamed, objectified, and brutalised by individuals and institutions around them.

“By the end, we arrive at a world where each of the many female leads have chipped away at those barriers and, against the odds, proven that they are resilient, strong-willed individuals who are rational and independent.

“They challenge their systems and ascend to take the most powerful international security roles in their world.

“They have seized agency where that agency was once categorically denied to them.”

Ms Adamson said she was confident the increased visibility of women in leadership through popular culture would go a long way in addressing the gender imbalance of the still male-dominated profession of security and defence.

“Physical role models matter, whether in real life or on television,” she said.

“We live in a time where women can be Jedi knights in Star Wars, where they step on screen as Dr Who, and they are centre stage in the fight against terrorism in Homeland.

“As the Game of Thrones phenomenon draws to a close next year its most important legacy may be its female leads.

“Imperfect, often imprudent, but none the less equal to men in their capacity to make difficult decisions and take on roles of leadership in international security.

“I am certain these characters encourage future waves of female leaders in security and foreign affairs.”