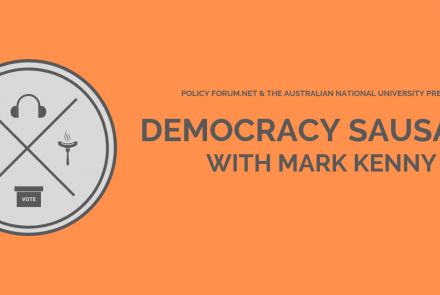 In this special series from Policy Forum and The Australian National University, Mark Kenny leads a weekly discussion on the issues, policies, and politics of Australia’s election campaign. In the first episode, Mark and guests Shirley Leitch, Andrew Hughes, and Bob McMullan take a look at an opening week dominated by tax, personality politics, and social media campaigning.

One week in, are the policies announced by Australia’s major parties resonating with voters? On this first episode of our new podcast series, Democracy Sausage, host Mark Kenny takes a look at the policies and politics of the first week of campaigning – from tackling cancer to tax cuts and all points in-between, and how those commitments might be playing out with voters. Mark and the panel – Bob McMullan, Shirley Leitch, and Andrew Hughes – also discuss how the parties are using social media to target voters, and whether Australians respond well to tax cuts or care more about inequality. Listen here.

Andrew Hughes is a lecturer in marketing in the Australian National University’s Research School of Management, where he teaches marketing at both undergraduate and postgraduate levels.

Shirley Leitch is a Professorial Fellow at The Australian Studies Institute at The Australian National University. She has written more than 100 peer-reviewed papers and held more than $5 million in national competitive grants. She has undertaken senior advisory roles for government and industry and contributed to numerous government reviews.

Bob McMullan is a Visiting Fellow at Crawford School, following a long and distinguished career in the Australian Parliament as one of Australia’s pre-eminent Labor politicians, during which time he held a number of Ministerial and Shadow Ministerial positions across a broad range of portfolios.

Is Captain GetUp a help or a hindrance to Tony Abbott? – Jacqueline Maley (The Sydney Morning Herald)

Policy Forum Pod is available on Spotify, iTunes, Stitcher; and wherever you get your podcasts. We’d love to hear your feedback for this podcast series! Send in your questions, comments, or suggestions for future episodes to podcast@policyforum.net. You can also Tweet us @APPSPolicyForum or find us on Facebook.

This podcast is part of Policy Forum’s Australian Election coverage, and published in partnership with The Australian National University.

Mark Kenny takes a weekly look at the 2019 Australian election campaign with expert analysis and discussion from researchers at The Australian National University.