Home » News and events » All stories » Don’t ever keep silent 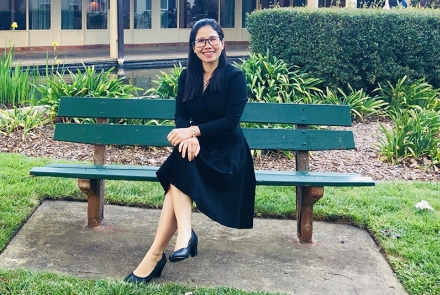 Blind in one eye, Crawford graduate Chhunleang Vat not only pushed her physical boundaries, but also proved to others – and herself – that her disability couldn’t hold her back from doing what she always wanted to do: study in Australia.

Now, Chhunleang, with a Master of Public Policy in her back pocket, is a strong, confident young woman – and she worked hard to get to this point.

Having friends, lecturers, advisors and other kind people she met along the way in her corner, motivating and cheering her on, was invaluable, she said.

“Studying in Australia has been my dream since I was young. So I decided that I would try my hardest to achieve it,” she says.

“I’ve built so much more confidence during my time at Crawford – sometimes I even forget that I have a disability. In my country, people sometimes looked down on me – they didn’t always say something, but I could read it from their faces. But I learnt to overcome that. I found that I can do anything if I try hard enough.

“I’ve been so impressed with how supportive lecturers, tutors and other students were here at Crawford. I really appreciated the advisors here. Whenever I felt that I knew very little about a subject, they didn’t just help me understand the subjects better, but they also motivated me.”

When Chhunleang came to Australia it was initially overwhelming, but she soon learnt that there are no questions not worth asking.

“When I first arrived, I had to register for everything online. Even for borrowing a book, I had to use a machine. In Cambodia, when I went to the library, the person behind the counter would take care of that.

“Initially, this was really challenging. Normally, I don’t like to talk much. I’m friendly, but sometimes, I just need my own space. So I felt very shy about asking for help. In class, I initially was very hesitant to ask questions, because I was worried that my lecturers might think it was a stupid question, so I felt afraid.

“But my lecturers always noticed. And they would laugh and say ‘there are no stupid questions’.”

Before coming to study in Australia, Chhunleang had to overcome a big hurdle: learning English.

But that wasn’t the only challenge she was facing – with only one viable eye, the pressure on the other to do all the work was massive.

“I had to learn English by myself. I didn’t go to an outstanding school, so when I was still living in my hometown, I would go to study with an English teacher and a small group of other students. But I only had very little money to spend, so I also practised a lot with a friend.

“Everyone was so understanding when I hit my limits sometimes. If I look at a screen for a very long time, my eye gets really tired and dry, and everything just blurs. You see, I can only see with one of my eyes, so there’s a lot of pressure on the other.”

Equipped with already two bachelors degrees, Chhunleang still felt that her knowledge in her area of work was limited. Coming to Crawford was just the right decision to make, she said.

Working for Cambodia’s Ministry of Women’s affairs, she decided to take a broad perspective, studying a wide range of public policy issues.

“I felt that if I had specialised, it would’ve been too narrow for me. At my workplace, we’re trying to mainstream gender into every area – politics, economics, education, healthcare. That’s why I didn’t specialise – my area is a cross-section.

“Lecturers here at Crawford are passing on such broad knowledge, and some even offered to stay in touch when I return to Cambodia, if I ever had any questions.”

Looking back at her outstanding achievements, Chhunleang feels that motivation needs to come both from the outside and the inside, and that sometimes, a few words of encouragement are the best medicine one could ask for.

“Everyone is unique and has their own potential. But one thing we all have in common is that we all need motivation. Just a few words of encouragement can do so much.

“I wanted to challenge myself, but some people kept saying that I would never make it to study at a good school. But I was lucky, because I had a few good friends who kept motivating me.

“But I also had to work hard and believe in myself. That was entirely up to me to do.”

On her return to her home country, Chhunleang wants to become an advocate for empowering women and people living with disabilities, and teaching others what she learnt here: don’t ever keep silent.

“When I go back to Cambodia, I want to promote people with disabilities and women. I know it’s an incredibly heavy burden to carry, but if you keep pushing, you can do it. Some people might try to step on you, but mostly, in this society, there are many good people that are there to help you.

“Cambodia is a developing country, and many people with disabilities feel like they’re not going to get anywhere in life. I felt much the same way, because some people around me kept telling me that that was the case.

“I kept silent so many times in the past, because I felt ashamed to ask. But now, I’ve changed my perspective. You have to ask and speak up, being here, I proved it to myself. Now I can return to my home country with my head held high.”