About the Sir Roland Wilson Foundation:

The Sir Roland Wilson Foundation was established in 1998 with donations from ANU and the Wilson family estate to advance the study and development of public policy and management within Australia and internationally. 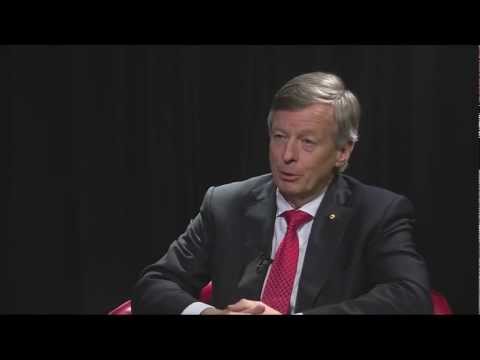 The future of federalism

The outgoing Chairman of the COAG Reform Council Paul McClintock AO has called for a “national conversation” about the future of Australia’s federal system and cast doubt on whether COAG is up to the job of implementing the country’s policy agenda.

Speaking at the Sir Roland Wilson Foundation lecture at the Crawford School of Public Policy on Monday night, Mr McClintock said that the current structures and settings of national governance were unlikely to be able to achieve the broad visions set out by government.

“We are standing at the precipice of some of the grandest visions in our nation’s history,” he said.

“[But are our settings] strong enough to support such change? Are they flexible and mature enough to drive the reforms that are this generation’s obligation to the next?

“In my view, the answer to both those questions is – quite simply, but quite emphatically – no.”

Mr McClintock steps down next month after six years as the founding head of the COAG Reform Council. He said that although the current policy agenda puts a “premium on collaboration”, this was not being backed up by any attempt to modernise the COAG process.

“Australia’s current policy agenda [is] shaped…around enormous tasks [like] the National Disability Insurance Policy, the implementation of the Gonski Review, and the challenges of the Asian Century white paper.

“The weakness of the current model is that this enormous overlap is not matched by any real commitment to strengthen the institutions which are the foundation of a melded system.

“Political leaders must address its weaknesses if we are to have any hope of achieving real reform across such complex issues.”

In his speech, Mr McClintock paid tribute to the work of Sir Roland Wilson, one of Australia’s most respected public servants. The Sir Roland Wilson Foundation was established in 1998 with donations from ANU and the Wilson family estate to advance the study and development of public policy and management within Australia and internationally.