Home » News and events » All stories » Graduating with flying colours 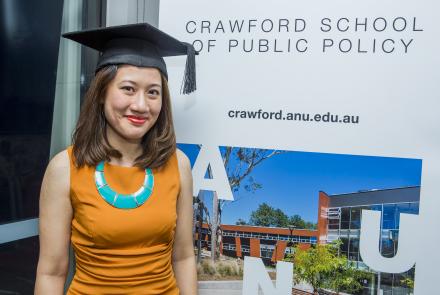 The school said goodbye to 180 former students at July’s graduation ceremony, but one of those students is not only leaving the school, but also leaving Australia and her role as President of the Crawford School Students’ Association (CSSA).

Master of Public Policy student Than Way, an Australia Awards recipient and President of the CSSA said she was grateful for the opportunity to study at Crawford.

“It was challenging at the beginning, but as I got more confident with my studies, I started to make friends from different countries who had different experiences. They became my family and I’m just so lucky to have had that,” said Than.

Over 2,100 ANU students graduated at Llewellyn Hall as part of the July ceremonies, including 180 students’ from Crawford. After the official ceremony, more than 200 people including graduates and their families celebrated the special day at the School’s exclusive graduation party.

Tracking Than down at the graduation party for a chat about her time at Crawford was a difficult mission as streams of students and academics congratulated the scholar on her achievements. Peers also posed for their last photographs with her, saying their teary goodbyes before she boarded a plane back to her home country, Bangladesh, the following day.

Despite being sad to leave Australia, Than said she was excited for her next challenge- working as a Consultant for the World Bank with the International Finance Corporation. She began her new job just a few days after graduating and arriving back in Bangladesh.
Than’s final advice to future graduates and those that will follow in her footsteps with the CSSA was simple.

“You have to live life with balance. Be a bit serious when it comes to your academic work, form networks with professors, form social networks with your peers and most importantly, have a good time. You’re only here for a short time,” said Than.