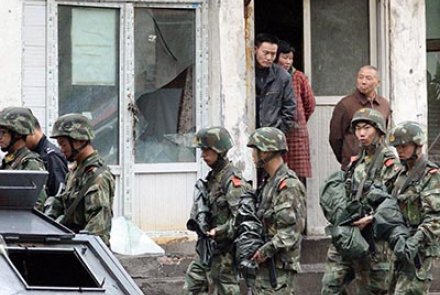 Dr Michael Clarke is an internationally recognised expert on the history and politics of the Xinjiang Uyghur Autonomous Region.

China’s hard-line approach to Uyghurs in the Xinjiang province has been counter-productive, with the recent passport revocations part of a broader pattern of repression, Michael Clarke writes.

Recent reports that authorities in the Xinjiang Uyghur Autonomous Region have required residents in some localities throughout the province to hand in their passports for “annual review” by the Public Security Bureau is not an unpredictable development.

Rather, it is part of a pattern in an increasingly restrictive set of policies that authorities have implemented. This is being done as part of a concerted counter-terrorism effort based not solely on outright repression of overt opposition to Chinese rule but also on comprehensive “everyday” surveillance.

Such surveillance spans high to low-technology methods. High-technology methods have ranged from the bio-data samples for passports to the installation of China’s “Skynet” electronic surveillance system in major urban areas providing police and security forces with “high-definition video surveillance cameras on public buses and at bus stops; on roads and in alleys; in markets and shopping centers; and in schools”.

Low-tech measures have included the rollout of the so-called “double-linked household management system” where households in towns and villages are “divided into groups of ten to watch over each other for security and poverty alleviation”. Policing has also been significantly increased in recent years with authorities establishing in major cities, such as the capital Urumqi, “convenience police stations” – essentially mobile police stations – and increasing patrols of often ethnically Uyghur neighbourhoods.

While China has been pursuing a muscular strategy of integration – based on tight political, social, and cultural control (including the regulation of religion and outright suppression of dissent), encouragement of Han Chinese settlement, and state-led economic modernisation – these recent measures are arguably representative of an emerging “national security state” mentality in Xinjiang.

In Western scholarship this concept has most often described three major dynamics; (i) the so-called “real-state” of the Cold War era in which primacy was afforded to the protection of borders, physical assets and core values through military means; (ii) the institutionalised provision of security and its prioritisation over other functions of the state (one example being the US 1947 National Security Act); and (iii) the collection of institutions, structures and processes within an individual state responsible for the conduct of foreign policy.

In the contemporary setting in Xinjiang, it is this second dynamic that is clearly ascendant. Its rise has been driven by a number of key internal and external developments.

First, although Beijing’s integrationist agenda has yielded significant economic development in the region, its effects have been unequally felt across ethnic and regional lines within Xinjiang. Additionally, it has also engendered sometimes violent opposition from the Uyghur population who bridle against the demographic dilution, political marginalisation and continued state interference in the practice of religion that has gone hand-in-hand with Beijing’s approach.

Second, Uyghur dissatisfaction with this situation has been met with the implementation of a sustained hard line by authorities including regular “Strike Hard” campaigns against manifestations of “separatism, extremism and terrorism”. In turn, this prolonged hard line has contributed to an increase in the numbers of Uyghurs seeking to migrate from China in recent years, either legally or illegally, causing increasing diplomatic headaches for Beijing.

Third, following the attacks of 9/11 and the George W Bush administration’s “global war on terror”, Beijing was able to link incidents of Uyghur opposition and anti-state violence to the influence of the Islamist terrorism practised by Al Qaeda. This was initially successful for China with the Bush administration recognising the “East Turkestan Islamic Movement” (ETIM) – a group Beijing claimed was “supported and funded” by Osama bin Laden – as an “international terrorist organisation” in September 2002. While the claim of Al Qaeda’s direct support of ETIM has been widely disputed, and there is little evidence that the group successfully mounted an attack in Xinjiang, it did have a presence in Afghanistan from 1998 until the post-9/11 US invasion.

Subsequently, the group shifted its base of operations into Waziristan where its leader, Hasan Mahsum, was killed during a Pakistani military operation in October 2003. The Turkestan Islamic Party (TIP) emerged as a successor organisation in 2006 and remained based in Waziristan, allied with the Pakistani Taliban, Al Qaeda and the Islamic Movement of Uzbekistan.

Beijing’s claims of the TIP’s connection to attacks and incidents in China have grown as a result of a number of high-profile attacks since 2012, such as the 28 October 2013 SUV attack in Tiananmen Square, the 1 March 2014 Kunming railway station attack and the 30 April 2014 suicide bombing at Urumqi central railway station. These incidents suggested an expanding geographic reach and level of sophistication not previously attributed to the TIP and may reflect the group’s closer alignment with Al Qaeda.

More troubling for Beijing, and undoubtedly connected to greater vigilance vis-à-vis travel documentation is evidence of increased connections between radicalised Uyghurs and broader regional and global currents of jihadism. The TIP, for example, has a demonstrated presence in the Syrian conflict, where it has been fighting with Al Qaeda’s affiliate, Jabhat al Nusra. Closer to home, on 30 August this year, an Uyghur suicide bomber attacked the Chinese embassy in Bishkek, Kyrgyzstan. Significantly, Kyrgyz authorities subsequently reported that the bomber from the attack was a TIP member who “had a passport registered in the name of a Tajik national, who was aided and abetted by an Uzbek suspect who was believed to have left Kyrgyzstan on an Osh-Istanbul flight hours before the attack”.

The core issue for Beijing is that it has created a self-fulfilling prophecy in relation to Uyghur terrorism. It has not only sustained a decades-long and tightly-controlled state-building agenda in Xinjiang that has generated Uyghur discontent but also coupled this, since 9/11, with a pervasive securitisation of ethnic identity through its discourse on the “three evils” of “separatism, terrorism and extremism”. The former has prompted increased alienation among the Uyghur population, compelling some to seek a better life beyond Xinjiang and others to become radicalised. Both of these developments have in turn provided further justification for hard-line responses by Beijing, completing the vicious circle of the Chinese national security state.