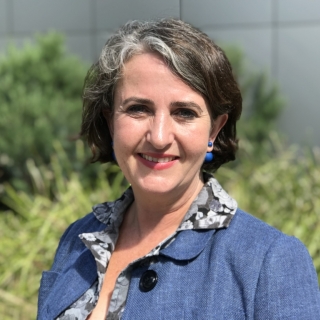 Sarah Roberts joined the National Security College in February 2021 on secondment from the Department of Foreign Affairs and Trade, taking up a new role as Deputy Head of College. She plays a lead part in reshaping the College and its capabilities as it moves into its second decade – contributing to the full suite of NSC activities, expanding its partnerships with and beyond government, and strategic planning and reporting.

Sarah has over two decades’ experience working for the Australian Government across a wide sweep of foreign policy in bilateral, regional and multilateral roles, in Canberra and overseas, with a focus on the Indo-Pacific. She has had diplomatic postings to Thailand and Fiji, and to Brazil. Other shorter assignments have included heading up Australia’s Consulate-General in Mumbai during the COVID-19 lockdown, truce monitoring in Bougainville after the civil conflict there ended, and working in the Australian pavilion at the Universal Expo in Spain. Most recently, she worked in DFAT’s Office of the Pacific contributing to pivoting the Pacific Step-up policy as the region responded to the impact of COVID-19. Sarah also worked on the global diplomatic campaign to secure Australia’s inaugural UN Human Rights Council seat, and then contributed to the development of policy around Australia’s three-year term on the Council.

Sarah holds a Bachelor of Arts (Jurisprudence) and a Bachelor of Laws with Honours from the University of Adelaide, and a Foreign Affairs and Trade Masters degree from Monash University. She speaks Spanish and Portuguese.