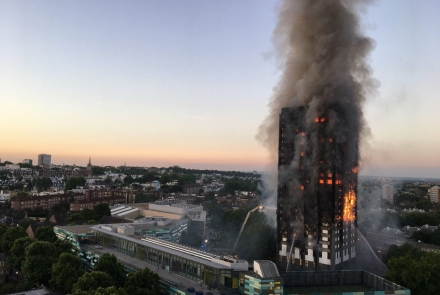 The US votes: Deplorables, Expendables and other ‘Nasties’
What does Trump's win mean for Trump voters?

The Grenfell Tower tragedy is a symptom of the divide not just between rich and poor, but also between those who govern and those who are governed, Quentin Grafton writes.

Every generation has its moment when finally the political pieces fall apart, when the half-truths are shown for what they are, and when the inanities repeated ad nauseam to voters by self-serving politicians are exposed as empty slogans. Perhaps the terrible fire that engulfed Grenfell Tower in London will be this moment.

At the time of writing, at least 79 people are confirmed to have died and many more are suffering from severe respiratory problems due to toxic smoke from the blaze. It is hard not to feel profoundly affected by the terrible events that unfolded on 14 June. The devastating loss of lives, the brave response and tireless work of the emergency services, the passion of those speaking up for people who can no longer speak up for themselves, all highlight that at times of crisis, communities come together.

But the community is not the problem here, is it? The problem is political neglect, an ‘out of sight, out of mind’ attitude from some towards society’s most disadvantaged.

Grenfell was built in 1974, as one of many tower blocks of the United Kingdom’s efforts of the 1960s and 1970s to improve the quality of housing for low-income households. Despite a renovation of the building completed in 2016, it now seems that the fire was a disaster waiting to happen. Indeed, the 2016 renovation failed to install sprinklers in the building but did install hazardous external cladding, possibly done illegally, and at a cost of $4.5 million, including replacement windows.

The fact that the Grenfell Tower was owned by the local council and rented to the less well-off has raised real concerns about the willful disregard for safety and the value placed on human life by those who make decisions on behalf of the people. This has been reinforced by either incompetence or a lack of caring for the surviving residents in the first couple of days after the fire.

Is it the case that the people who lost their lives in the Grenfell Tower died simply because those making decisions about their safety during a multi-million-pound renovation placed a higher priority on saving costs rather than saving lives? If it turns out that decision-makers put a higher value on the public purse rather than the public itself, this should appal, but not shock us. Beneficiaries and recipients of state support are, typically, valued much less by many elected leaders than those with money and influence.

This is not just a problem in the UK. Here in Australia, too, welfare recipients or the poor have been called ‘leaners’. Such categorisations, wherever they happen, serve to dehumanise people who just happen to have a low-income. Should we value life simply on how much we get paid?

Naturally enough, the politicians doing the name-calling would consider themselves to be ‘lifters’. But who is leaning on whom if politicians do not make decisions in the public interest? We might ask the leaders in the Kensington and Chelsea Borough Council where the Grenfell Tower is located what ‘lifting’ they were doing when decisions were made about the 2016 renovations. Did they speak up about the absurdity of putting external cladding on a tower block while not paying to have sprinklers installed?

The video of Prime Minister Theresa May scurrying from angry residents and their concerns in the neighbourhood of the Tower illustrates the great divide that has grown between those who call the shots and those who bear the consequences. And let us be clear, this is not just about the divide between the rich and poor. When there is a growing disconnect between those who govern and those who are governed, we are all losers. Indeed in Australia, as in the UK, there are many buildings that have external cladding and these are not just in residences for the disadvantaged. Even before the Grenfell Tower fire such cladding was already identified as a fire risk and, according to the Melbourne Metropolitan Fire Brigade Commander, “outright dangerous”.

The fact that a politician, from the right or left, may care more about a political donor than, say, an unemployed window cleaner should not surprise us. But it will be an outrage if it is true that the repeated advice of safety experts were ignored and decisions were taken during the 2016 renovation that ultimately led to the catastrophic fire of the Grenfell Tower.

Confronting the issues of the Grenfell Tower and what it says about how we are governed is much, much more than simply giving meaning to the shameful loss of life in London. It is about standing up and calling out what is wrong. It is about those in power listening when they are told a decision they are about to make will put lives at risk.

Turning wrongs into rights may sound like a well-meaning fantasy. But it is worth recalling what a few people can achieve if they set their minds to it. In the 19th century, the tireless work of Samuel Plimsoll led to legislation in 1875 that, ultimately, saved the lives of thousands from unscrupulous owners who previously overloaded their ships to increase their profits, but at the risk of sailors’ lives. William Wilberforce was another reformer who spent most of his life working to end the British Slave Trade – a feat which he and his associates achieved in 1807 – and then helped put an end to slavery across the entire British Empire in 1833. In our time, where are the reformers for the good? Where are the leaders prepared to put people first?

Let us hope that the Grenfell Tower Tragedy leads to better building standards and other reforms, but let us also back this up with our own actions. Above all, no matter who we vote for, we must engage with what is happening in the world, we must insist that decisions are taken in the public interest, and we must hold to account those decision-makers who disregard the risks they impose on others. This is about giving ‘voice to the voiceless’, and not just on election-day, and it is about asking our leaders to stand up and deliver.