Home » News and events » All stories » The Pacific’s dramatic urbanisation 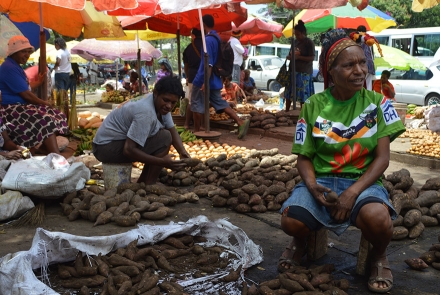 Image by ILO in Asia and the Pacific on Flickr https://www.flickr.com/photos/iloasiapacific/21616800616/

The rapid and extensive change brought about by dramatic urbanisation in the Pacific, and the challenges that brings for those that live in those expanding communities, is the focus of the new issue of the Development Bulletin journal.

The Crawford School journal, which is now into its 30th year of publishing, this time around takes a look at Urban development in the Pacific. The 21 papers in the journal from 30 highly regarded Pacific scholars and residents shed light on the huge impact of unmanaged urbanisation on the development prospects of Pacific Island states.

“Urban development is the most dramatic recent demographic, social, economic and political change in the Pacific,” said the journal’s editor Dr Pamela Thomas.

“In over 40 years of working in the Pacific, I’ve never experienced such rapid or extensive change. But with big change, comes big problems.”

The articles in the Development Bulletin journal take a look at the impact of this change on urban residents who live in crowded settlements with few or no services, uncertain or no tenure, and often on marginal land that is prone to flooding or other environmental hazards.
“For many urban dwellers there are few employment opportunities and little for young people to do, however, as one article discusses recent urban dwellers often show considerable initiative in setting up small, innovative businesses. Similar initiatives are emerging in the ways in which settlement communities are dealing with widespread urban policy neglect and the failure of governments to deal with urban growth,” Dr Thomas said.

Another piece looks at how some communities are now beginning to organise themselves and argues the biggest challenge in rethinking the urban Pacific is to acknowledge that the form and structure of Pacific towns and cities will continue to be unordered, organic, haphazard, non-linear and often independent of state rules and regulations.

“This rapid and fundamental change has caused a range of problems which the authors identify,” said Dr Thomas, “but a key theme is that urbanisation seems to have brought into very sharp relief the divide between the rich and the very poor, the haves and the have-nots.”

All authors in the journal acknowledge the increasing problems with security and gender violence that are usually associated with increasing urbanisation. A number of the papers look at security issues from efforts to deal with increased violence against women, theft and homicide and the dramatic growth of private security companies.

Dr Sinclair Dinnen of the State, Society & Governance in Melanesia program in the ANU Coral Bell School discusses the impact of private security organisations in Papua New Guinea which “employ over 30,000 security guards – over three times the number of police” and the emergence of security services as the most rapidly expanding business opportunity in Melanesia. The cities of Lae and Port Moresby, Dinnen adds, “were identified in 2010 as two of the world’s most dangerous cities.”

To make cities more liveable for rural migrants and those living in the settlements, the journal’s authors discuss the need for urban champions, a focus on local governance, capitalising on the convening power of non-traditional groups and the establishment of civil society forums, but they conclude this will not happen unless there is better connectivity between those on the margins an those at the core.

Back issues of the Development Bulletin journal are available here: https://crawford.anu.edu.au/rmap/devnet/dev-bulletin.php