Home » News and events » All stories » Indo-Pacific in focus 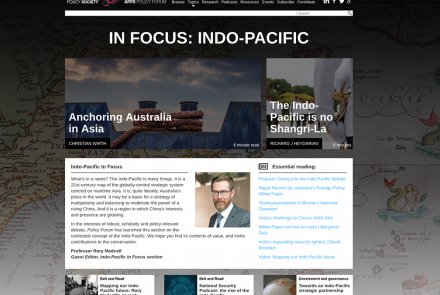 Crawford School’s Policy Forum site has launched a new, special section looking at the Indo-Pacific concept. The section is guest edited by Professor Rory Medcalf, one of the world’s foremost proponents of the idea.

The In Focus: Indo-Pacific section on the site brings together some great writing, analysis, podcasts and videos exploring the Indo-Pacific from every angle.

The section launched on Thursday 28 June with two new pieces: Richard Heydarian taking a look at how India, America and Indonesia all have very different views on how the newly-conceptualised region should work; and Christian Wirth discussing whether the concept can help anchor Australia in a rapidly-changing region.

In Focus: Indo-Pacific Guest Editor and Head of the National Security College Professor Rory Medcalf said the new section brings together a broad range of views looking at the concept:

“What’s in a name? The Indo-Pacific is many things. It is a 21st-century map of the globally-central strategic system centred on maritime Asia. It is, quite literally, Australia’s place in the world,” he said.

“It may be a basis for a strategy of multipolarity and balancing to moderate the power of a rising China. And it is a region in which China’s interests and presence are growing.

“In the interests of robust, scholarly and policy-relevant debate, Policy Forum has launched this section on the contested concept of the Indo-Pacific. We hope you find its contents of value, and invite contributions to the conversation.”