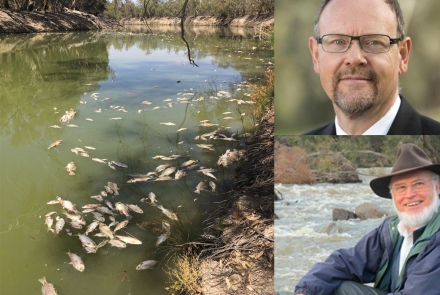 Quentin Grafton is Professor of Economics and Director of the Centre for Water Economics, Environment and Policy at Crawford School and Editor-in-Chief of Crawford’s online platform, Policy Forum. John Williams is a Fellow of the Australian Academy of Technological Sciences and Engineering and an Honorary Professor at Crawford School. Both have written extensively on environmental issues surrounding the Murray-Darling Basin.

The death of a million fish at Menindee Lakes in January sparked nationwide attention after a Facebook video posted by distressed local residents went viral. The fish kill came less than a month after a similar incident in the same part of the Darling River.

In response to a request from the Leader of the Opposition, The Australian Academy of Science has put together an expert group to provide independent scientific advice on the fish deaths. The panel will look into how the fish kills happened, the role of water management practices in the disaster, the impact of chemical and fertiliser use, immediate steps to improve the health of the river system, and the effect of climate change. The seven-member panel will be chaired by Professor Craig Moritz, Director of the Centre for Biodiversity Analysis at the Australian National University.

“Their advice will be a synthesis of the best available knowledge and will be presented in a way that makes it accessible to decision makers and the Australian people,” says Academy President Professor John Shine.

The written advice will be supplied to the Opposition Leader on 10 February 2019 and will be made publicly available.