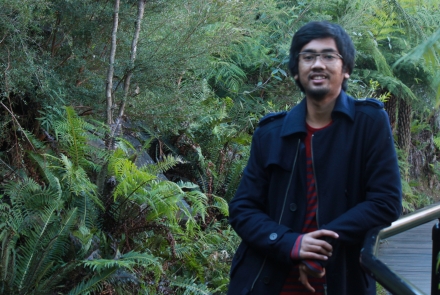 Looking at green economy projects in East Kalimantan, Indonesia, whilst doing the Master of Environmental Development and Management (Advanced), Crawford graduate Sandy Nofyanza fell even deeper in love with research.

Whilst working at the University of Indonesia, Sandy heard about the many outstanding researchers that are teaching at Crawford School and quickly decided he wanted to come here to pursue his postgraduate degree.

“I was a research assistant at the University of Indonesia with a strong social science background, and I saw that Robert Costanza and Luca Tacconi were based at Crawford School – so it was a pretty easy decision,” he says.

Once he had his foot in the door, Sandy focused on his main research interest – the implementation of green economy initiatives in East Kalimantan. He wanted to hear about it first-hand, so he decided to do fieldwork.

“The buzzword ‘green economy’ is thrown around a lot, but as of today, my study is one of only a few research projects that look at the implementation of the green transition in East Kalimantan specifically and the impact on the coal mining and palm oil sectors in the province.

He found that the province still had a long way to go, particularly in the coal mining and palm oil sectors.

“In the coal mining sector, there has been very little progress in the implementation of green economy initiatives. This is because the government remains focused on making coal companies comply with the regulations, instead of phasing out or limiting production. A ‘green’ transition is a politically and economically challenging task since coal contributes greatly to the province’s economy.”

“On top of that, the inclusion of coal companies in Kaltim Green initiatives remains limited. Many haven’t even heard about it. As for the palm oil sector, there’s a huge tradeoff between economic growth and the environment; between expanding the size of palm oil plantations or protecting the High Conservation Value Forests (HCVF) within palm oil concessions.”

But he also discovered that networks amongst people working on environmental issues were key in driving green economy projects.

“On the bright side, East Kalimantan has a lot of people that are working in the NGO sector and provincial government alike that have personal ties with each other and have studied under the same professor (particularly from the Mulawarman University in Samarinda). Together they have turned the province into a pilot for a province-wide carbon fund scheme under the Forest Carbon Partnership Facility (FCPF).

“Given these special networks, they can actually pursue the tiring process for approval of the carbon fund, which takes up to five years.”

For now, Sandy wants to build his own networks, but coming back to Crawford isn’t out of the question.
“I want to continue working in research. Maybe I’ll even return to Crawford to do a PhD.”