Home » News and events » All stories » Livelihoods, workers, and COVID-19 in India 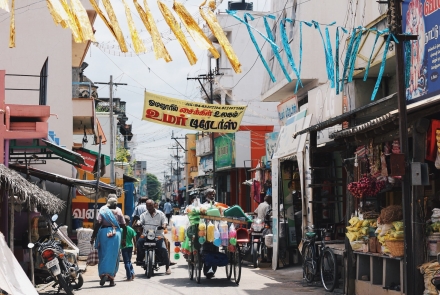 Photo by Elle on Unsplash

Livelihoods, workers, and COVID-19 in India

Kuntala Lahiri-Dutt convenes the gender specialisation in the Masters in Applied Anthropology and Participatory Development (MAAPD) course and also teaches courses on Exploring Gender and Development.

India’s pandemic response is leaving a crucial sector of its population behind and causing unnecessary suffering in the process, Kuntala Lahiri-Dutt writes.

India is not new to epidemics. Growing up in the country, I still remember the 1974 smallpox that took the life of one of my girlfriends and completely disfigured another one. I also remember the gastro-enteric outbreak, locally called ‘antrik’, as Calcutta city’s water supply system was polluted by sewage, forever changing what the middle classes see as ‘pure’ and drinkable water.

In the past, too, pandemics ravaged the country; one look at India’s demographic graph of the 20th century shows that the dip in population between 1911 and 1921 is stark. As students, we were told that this drop was due to ‘Burdwan Fever’, named after the district in eastern state of West Bengal.

We read about the malaria epidemic that decimated rural parts of Bengal, then one of the largest and richest provinces, as the British built embankments to lock the truant rivers within fixed courses, and to earn revenues from the land on the floodplains thus freed up for agriculture.

India has also made significant achievements since its independence: the 1994 Surat plague was quashed effectively, smallpox and polio have been eradicated, and the average life expectancy rose from 32 years at the time of Independence to 67 years in 2012. In the process, the growing middle class earned itself a privately-owned $372 billion healthcare industry in cities to attract patients from all around the world.

Still, India has one of the lowest doctor-population ratios in the world: only 7.7 doctors per 10,000 people according to the World Health Organization, a figure that is much lower than many other developing countries and close enough to some deeply poor countries of Africa such as Sudan. The pathetic condition of state-run hospitals puts India to shame, and over a third of Indians aged 15-49 remain undernourished.

The 2020 pandemic arrived at a time when economic growth had slowed down. The slowdown was for a number of reasons – the disruptions caused by the abrupt, ill-conceived and autocratic fiscal measure of demonetisation probably being the primary one. In this late 2016 measure, the government’s decision to remove 86 per cent of the currency had badly affected the informal sector, called the ‘unorganised sector’ in India.

The informal sector constitutes about 81 to 88 per cent of the Indian economy, and contrary to popular belief in more affluent nations, is not synonymous with the illegal economy.

The sector comprises a vast array of small-to-medium sized enterprises; the burgeoning construction industry, the innumerable quarries and small-scale mines producing construction materials, the brick-fields, garment factories and diamond/gemstone cutting-polishing units, and even much of agriculture, including large-scale commercial varieties, is part of this sector.

The informal sector is the backbone of India’s wealth, as the formal sector depends on the goods and services provided by it. It employs the vast majority of India’s workers, and is driven by a massive army of extremely poor, highly mobile, seasonally circulatory, daily-wage and contract labourers.

The work they perform is truly precarious, and the sector is a mix of traditional, feudal labour relations with modern capital-intensive, market-oriented production systems. India has neither effectively imposed its many factory and labour laws on this sector, nor do the enterprises in this sector strictly follow environmental legislation.

One may have expected that – armed with a great deal of experience of handling major disasters – that the National Disaster Management Authority should have designed a system and a process to deal with such emergencies by now. However, that is not the case. Initially, it took the Indian government quite some time to understand the enormity of the new virus ravaging the world.

Critics say that the government was busy with matters such as the visit by the US President Donald Trump in February. The Prime Minister was implementing a clearly divisive new law that made the minority communities nervous and anxious to protest, leading to a violent riot in the capital city of Delhi beginning late February.

In all of this, the government demonstrated how not to handle a pandemic by ignoring the early warning signs of the first reported case on 30 January, when officials had declared that ‘Coronavirus is not an emergency’ and there is nothing to panic about. Soon, ludicrous news also emerged about Hindu activists performing yagnas – symbolic fire-worshipping – and drinking sacred cow urine to ward off the virus.

On 17 March, the government issued guidelines on the use of masks and proposed a set of physical distancing measures, although their implementation in a populous nation remained unclear. All educational institutions, gyms, cultural and religious centres, shopping malls, and theatres were shut down until further notice, domestic help and other essential services workers were to stop work, and citizens were requested to not panic buy.

In a televised speech on 19 March, Prime Minister Modi announced a voluntary Janta Curfew (public curfew) to begin 22 March, and asked citizens to come out on the roofs and balconies of their houses and apartments to clap, blow conchshells, and clang on steel plates (thalis) to thank India’s untiring health professionals.

The idea tickled the imagination of the middle-classes, as it is a common belief that these measures not only alert each other but can drive evil away, for example during a storm or earthquake. A similar stunt was pulled off successfully later on 5 April at 9pm by switching off all electrical lights, and instead lighting candles and lamps for 10 minutes to show solidarity in these trying times.

At last, on 24 March, at 8pm, a nation-wide near-total lockdown was announced effective midnight, for an initial period of 21 days as a preventive measure to combat the pandemic. The decision took the country by surprise not just for its scope but also for its timing, as though meant to generate ‘shock and awe’.

By the time the prime minister spoke, shops had closed for the day. Confusion prevailed since directives were still not in place or communicated. Police were deployed to keep a close watch on those flouting the rules. The first phase of the lockdown moved to the second and then the third, and India is now in the fourth phase of closure, albeit with some relaxations, slated to end or be further extended on 31 May.

Amidst the shutdown, urban citizens stood up to monitor neighbours and surroundings and socially ostracised those not following the rules of mask-wearing and enforced quarantine, thus ensuring that the virus did not spread unabated.

Middle class households donated generously towards the newly created PM-CARES Fund, housewives bitterly complained about having to do all chores without domestic help, formal employees were forced to work from home for an indefinite period, alcohol shops saw long queues as soon as they re-opened, viewership of Netflix rose, social media was flooded with photographs boasting of baking/cooking skills, and revenue of online shopping platforms delivering ‘essentials’ soared. In all, it reflected lockdowns in many affluent countries. However, this is only the story of the privileged lot.

The worst outcome was faced by the rural poor who had arrived at the more industrialised and affluent parts of the country to toil as wage labourers, often receiving small, uncertain, and irregular incomes for arduous physical work, and living in exceedingly poor, slum-like and unsanitary conditions, often in shanties.

When Indian railways announced stopping of all trains in what constitutes one of the largest networks in the world, millions of rural circulatory workers began their uncertain wait for the three-week lockdown to be over.

Soon, cash ran out as employers refused to pay wages and sacked workers. Food stocks depleted, and some labourers were even forced out of their temporary huts for being unable to pay rent. Many of them had not permanently relocated their families to the cities or industrial worksites.

Neither do they have the attachment to these sites, nor do they have the capacity to stay on in unfamiliar places without incomes. These people found themselves trapped following the speech made on that fateful evening.

Since the lockdown, reports have brought horrific stories of migrant workers across the country – sometimes with small children and meagre belongings – walking for hundreds of kilometres or gathering in bus or train stations pleading the administration to allow them to return home.

The labourers were also demonised; as they walked, they were sometimes made to squat on roads and disinfectant was sprayed, or the police herded them and beat them with sticks as they clamoured to get some form of transport to return home.

Local industrialists even used their political connections to force-stop the return. On request from the builders’ lobby, some states unilaterally prohibited trains from carrying workers back to their home states, and other states suspended crucial labour laws for as long as three years.

Suicides and deaths from hunger and from utter exhaustion have further made it clear that India’s migrant workers are literally dying to get back to their homes.

These images will leave a lasting imprint on the psyche of not only the rest of the world but also the younger people of India, who had not seen such inhumane treatment of the poor, such chaos and hunger, at such an enormous and unprecedented scale since the 1947 Partition of the country.

The inhumane conditions moved a group of 200 academics to call the situation a national emergency and publish an urgent appeal for immediate assistance to these workers.

To tackle the situation, policy suggestions floated so far include the expansion of the so-called ‘relief package’ that was announced by the Finance Minister.

Others have argued for unconditional cash transfers, offering food and improved health provisions, with particular emphasis on pregnant and lactating mothers.

Many have appealed to the government to use its vast network of rural fieldworkers (anganwadis), buildings of village council buildings (panchayat bhavans), government schools and colleges, railway and bus stations, community halls, block offices, district headquarters and other such infrastructure to establish relief centres to provide cooked food, medical care, water and sanitation for free.

Others note that while enforcing a general lockdown remains a priority, the financial package announced by the government means nothing without adequate welfare measures to protect the material security of the poor.

In the pandemic, more than just human lives, India lost its humane soul. The decision to lock the country down, made effective within four hours of its announcement, was poorly planned and completely overlooked the disastrous impact it would have on 90 per cent of the country’s labour force.

In its battle to ‘flatten the curve’, India ignored a very large section of its population. Without adequate social and economic protection measures, the state failed to look after its own poor and most vulnerable.

Their plight has now exposed the pathetic underbelly of deep poverty and helplessness of most workers, the sad news behind India’s economic growth, and revealed the structural challenges to policymakers.

This debacle has now made it clear that the informal sector of the economy that sustains the livelihoods of India’s poor needs more policy attention: the precarious working and living conditions of millions of workers, the mobile nature of most of the workforce, and most importantly, their defencelessness should be at the forefront of future plans and policies.