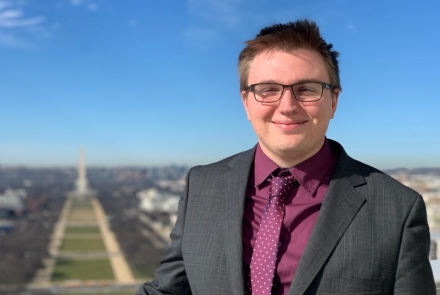 A US adventure – from an impeachment trial to the coronavirus

Having completed the Congressional Research Fellowship Program (CRFP) in the US Senate, ANU graduate William Palmer has returned with a bag full of fresh insights into how Americans actually view Australia, new perspectives on US policy and politics, and some first-hand experiences of the onset of the coronavirus crisis in the country.

For William, it quickly became apparent how seriously both Australia and the US are taking their relationship, and that views of Australia’s culture go far beyond stereotypical images of red dust and dangerous animals.

“Before the CRFP, it was straightforward to assume that most Americans would associate Australia with our projected cultural image – for example Koalas and Crocodile Dundee,” he said.

“After engaging with American policymakers, it became clear that although these associations were made, the Australian-US defence relationship was still by far the most prominent, and most important association.”

Through the CRFP, William had the chance to get close to the workings of US politics and policy, do research, and to improve his networking and communication skills at policy events.

“The program gave me a breadth of knowledge on how the American political process works – the nitty-gritty of how bills are written, how political offices function, how caucuses and committees run, and (before COVID-19 cut my trip short) what the appropriations process is like.

“I also learnt the ‘soft’ skills of politics – how to engage with constituents, and ways to improve my networking, yet the most important skill I learnt was in data communication.”

William has already returned to his position at the Australian Bureau of Statistics, but he said that the Fellowship had afforded him a rare chance to change his perspective that is now coming handy in his current role.

“It taught me skills in effectively communicating these complex topics to legislators and other policymakers without as technical a background. Since returning to my job at the ABS I have already put these skills into practice, and they proved themselves valuable.”

He also said that the experience had, surprisingly, made him more grateful for what Australia’s political scene has to offer.

“Coming back to Australia, I appreciate far more the significantly less polarised discourse on a number of issues, as well as the focus on innovation in government.”

William had to leave the US on 18 March due to the pandemic – a full month before the scheduled end of his Fellowship.

Experiencing rising concerns about of the virus in the US, and discussions mounting about how to manage the outbreak, was a confronting experience for him.

“To be in the US during the outbreak was a surreal and terrifying experience – seeing the streets become empty, and the mad rush to get me home begin was an experience I wouldn’t like to replicate,” he said.

“Yet to have been in the room when warnings were given about what disaster COVID-19 could bring, before what eventually happened, was a profoundly saddening experience. Life during the pandemic itself isn’t what sticks with me the most – it is the feeling I have looking back at those briefings, for which tragedy seems far too benign a term.”

William said that Crawford School gave him a lot of support through the process, both across the issues he had expected, and those he didn’t – namely the outbreak of COVID-19.

“The briefings I received before my departure, the contacts which the school gave me in D.C., and the huge helping hand in the visa process were all absolutely essential pieces of support, and my time over there wouldn’t have happened in nearly the same way if not for that support. The support I received when it became clear I had to leave the country due to COVID-19 was swift and decisive, and I always felt like I had people working to protect my wellbeing in unprecedented conditions.”