Home » News and events » All stories » A crowning achievement 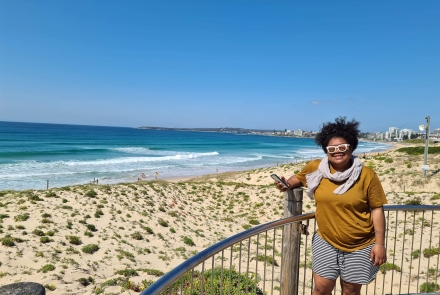 From student to teacher

From meeting the crown prince of Tonga on Zoom to being mentored by leading experts, Master of Public Policy graduate Vani Nailumu’s study journey was an exciting one that taught her about the value of making lasting connections.

For Vani Nailumu, there was no better place to study than ANU Crawford School of Public Policy.

Home to some of the leading experts in Vani’s field of interest, the School provided her with the right environment to build the foundations of her career.

“It is where the public policy magic happens. It not only hosts research centres like Devpolicy but also has an outstanding calibre of the teaching staff.”

One member of staff Vani was excited to work with was Professor Sharon Bessell, who leads the Individual Measure of Multidimensional Poverty project (formerly the Individual Deprivation Measure, IDM). Based on more than a decade of research the project provides decision-makers with detailed, nuanced and relevant information on poverty.

“I followed the IDM project back in Fiji, and I realised that having the opportunity to learn from one of the experts behind the project was something I did not want to miss out on,” Vani said.

In the end, the connections Vani gained through the WLI helped her obtain research work in Fiji with ANU Department of Pacific Affairs.

“I was privileged to be mentored by Crawford’s very own Associate Professor Sara Bice as part of the program,” she said.

“Sara not only taught my courses, but mentored me through important leadership aspects of public speaking, interviewing skills, and how to apply for jobs.

“One of the important things I learned through Sara, Crawford School, and the WLI is the importance of building relationships and maintaining them. Because in the long term these relationships, connections, and networks we make help us open doors that are hard to open by ourselves.”

During her time at Crawford, Vani greatly enjoyed learning with and from her classmates who brought a different perspective to the table, and helped her learn more about the core ideas of public policy.

“This made learning and doing these courses fun and insightful. I got to learn with and from economists in an anthropology class, environmental and gender experts in an economics class.

“The main point which resonated across the courses I took is that public policy is messy, value-laden and there is no one-size-fits-all solution to public policy issues.”

But there was one special situation that Vani will likely remember for the rest of her life: when she got assigned to a Zoom breakout room with fellow classmates, alongside the crown prince of Tonga.

“I had no idea that he was the prince of Tonga. We were having a discussion amongst the five of us when I asked him: ‘Hey if you don’t mind me asking, are you from the Pacific? Your name sounds like you’re a Pacific Islander.’

“He laughed and said he was from Tonga. I started talking to him like he was an ordinary person. I messaged my Tongan friend and told her: ‘Hey, there’s a Tongan guy named insert name​ in my breakout room right now, do you know him?’

“It was when our breakout discussions were nearing the end when she messaged to tell me that he was the crown prince of Tonga. Best believe I turned off my video and became silent like a mouse for the remainder of the class.”

Having spent the last two semesters of her degree studying online due to COVID-19 restrictions, Vani invested in a good old-fashioned paper-based organiser to keep herself on track with her studies.

“That daily to-do list next to my laptop served not only as a reminder but as a guide to keep me in check and on track for the day, week, and overall semester.”

Vani has now secured a short-term role as research officer on a project supervised by Dr Sonia Palmeri through ANU Department of Pacific Affairs, and she’s keen to apply the skills and knowledge she gained at Crawford School to help her country.

“I believe being a Crawford graduate sets one apart from other candidates when applying for jobs in today’s challenging jobs market.

“My next goal is to do my best in making a change and a difference by giving back to my country - no matter if big or small.

“My parting advice for new Crawford students is to make the most of your academic experience both inside and outside of the classrooms, expand your network, build, and invest into relationships at Crawford and at ANU, and especially maintain them. The returns you get will be multiplied and worthwhile.”