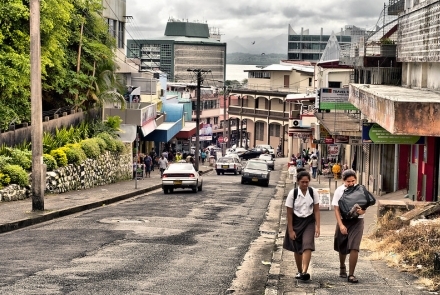 Fiji is introducing a ‘no jab, no job’ policy for public servants, whilst Japan has committed to vaccine assistance for the region, Hugh McClure writes.

Fiji’s situation continues to concern the region. The rolling seven-day average of cases there has reached 696, a marked increase from 269 a fortnight ago, and higher on a per capita basis than what was recorded in India during that country’s peak. 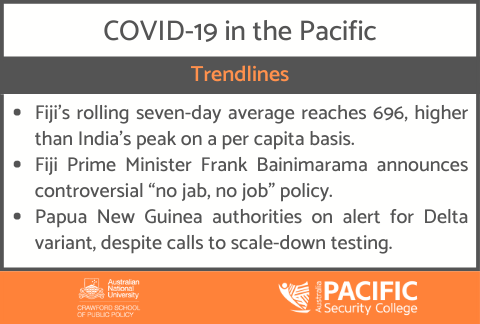 Non-compliance remains an issue in Fiji. The iTaukei affairs board has pleaded for the community to cut down on traditional communal gatherings and other events. On-the-spot fines for non-compliance of AU$13 for individuals and $2,680 for companies have been imposed.

Four health facilities were closed in the Lami-Suva-Nausori containment zone for deep cleaning, meaning that medical services were paused and instead offered at the Nausori Special School. Patients and staff at the Colonial War Memorial Hospital were left without breakfast or lunch after COVID-19 was traced to the hospital’s kitchen – resulting in it being closed for some time. Phone company, Digicel, has donated personal protective equipment.

Preparations are beginning for the arrival of the Moderna vaccine in Fiji, funded by the United States through the COVID-19 Vaccines Global Access facility. People over the age of 60, as well as pregnant mothers, will be encouraged to receive the Moderna vaccine.

The Papua New Guinea (PNG) National Control Centre has decided to “scale-down” COVID-19 testing and focus efforts on vaccine administration. The decision comes despite Health Minister Jelta Wong appealing for people to come forward for testing, stating that Delta variant cases in Indonesia, Australia and Fiji place PNG in a position of heightened risk. PNG’s Opposition Leader says he will challenge new restrictions on inter-provincial air travel, introduced to reduce the spread of COVID-19 between provinces.

Three mass-vaccination hubs are being created in Port Moresby, and vaccine eligibility has been increased to all people aged over 18. PNG’s rollout is currently ranked the seventh slowest in the world.

Vaccination awareness drives have commenced on Vanuatu’s outer islands, with several chiefs first to receive their inoculations. Meanwhile in Vanuatu, there is concern that it is too risky to repatriate ni-Vanuatu students studying in Fiji.

Australia’s Minister for International Development and the Pacific, Zed Seselja, has completed his first visit to the region, visiting PNG. Minister Seselja announced Australian assistance to the Angau Memorial Hospital in Lae. He rejected claims from China that Australia is “sabotaging” the Sinopharm rollout. It comes amidst reports that Pacific Island countries are benefiting from Australians’ hesitancy to receive the Melbourne-manufactured AstraZeneca vaccine, with increased shipments sent to the Pacific.

The Pacific Islands Forum Trade Officials meeting recognised the “unprecedented contractions in GDP” caused by the COVID-19 pandemic, and the ongoing social and economic ramifications. The meeting called for increased access to vaccines, and stressed the importance of an integrated, regional response to the pandemic to boost economic resilience and competitiveness post COVID-19.

Enagement with Japan is in focus this fortnight, following the 9^th^ Pacific Islands Leaders Meeting (PALM9). At the summit, Japan committed to vaccine assistance in the region.

Briefly, Samoa and Tonga have extended their respective State of Emergency periods, while there is a hint that the Solomon Islands Government will lift the State of Emergency on 24 July. Taiwanese tourists have arrived in Guam through its vaccine tourism scheme, which provides vaccines for tourists visiting Guam, provided they have tested negative prior to travel. With Australia and New Zealand increasing seasonal worker pathways, the Samoan Government has raised concern about the impact of such programs on families. Finally, Vanuatu’s first e-commerce symposium has been launched by the country’s prime minister. The symposium seeks to boost e-commerce out of the pandemic.