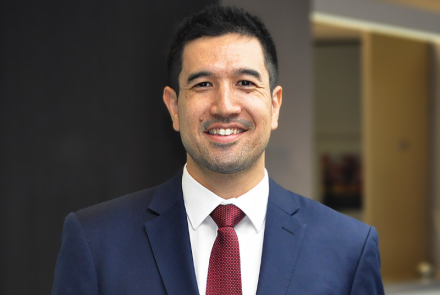 The Australian and global economic landscape has significantly shifted since The Australian National University (ANU) was first established by an Act of Federal Parliament on 1 August 1946, but the mission remains the same as we continue our work to ensure national prosperity and tackle the complex problems facing humanity.

Seven and a half decades since the University was founded, Associate Professor Shiro Armstrong reflected on the role ANU has played, and will continue to play, in securing Australia’s economic future.

During a pop-up talk at the launch of the University’s 75th anniversary celebrations, Dr Armstrong outlined how the ANU Research School of Pacific Studies was first established to “help drive Australia’s engagement with, and understanding of, Asia”.

Now known as the ANU College of Asia and the Pacific, the Research School of Pacific Studies helped define Australia’s engagement with our neighbours over the past 75 years.

“Sir John Crawford, after whom the ANU Crawford School of Public Policy is named, was the architect of Australia’s post-war engagement with Japan and Asia,” Dr Armstrong said.

“Crawford was instrumental in the 1957 commerce agreement that opened up the resource trade with Japan that gave it economic security in exchange for Australian political security—something he had advocated for in 1938.”

Sir John was one of the first in a long line of ANU economists and scholars who have shaped Australian trade internationally.

“Professor Drysdale would become recognised across the region as the intellectual architect of APEC, and with Professor Ross Garnaut, shaped economic cooperation in the Asia Pacific around the ideas of open regionalism and concerted unilateral liberalisation.”

Transformative ideas from the likes of Ross Garnaut, Trevor Swan, Wilfred Salter, Max Corden, Bruce Chapman and many others over the years saw the University make a tangible difference to the national economy, as well as define Australia’s engagement with our Asian neighbours. The leadership of people like Helen Hughes helped create the development program and later the Crawford School of Public Policy, named after Sir John.

“Thinking from ANU promoted open regionalism where Asian cooperation and arrangements didn’t come at the expense of those outside the region,” Dr Armstrong said.

“It is through these ideas and regional frameworks that the ANU had an influence on China’s commitment to reform and opening up its economy.”

As ANU turns 75, the region is facing a myriad of challenges unlike it has ever seen before.

“The big ideas and intellectual leadership that helped Australia engage with its Asian neighbours so successfully is now needed more than ever with an external environment that’s more uncertain than at any time in the University’s history,” Dr Armstrong said.

“The rise of China, new technologies, climate change and the retreat to fortress Australia from the coronavirus pandemic all present challenges to national prosperity.”

“ANU needs big and bold thinking, and to work closely with our research partners, including in China, to ensure the next 75 years of engagement are as productive as were the last 75.”

Join us for the ANU Japan Update 2021 to hear more from Dr Armstrong and see our research in action.