Photo by Markus Spiske on Unsplash

Making empathy unconditional: changing the story on poverty and inequality

With Australian Government benefits still at measly levels, children and their families are being sentenced to live in poverty – this cannot go on, Sharon Bessell writes.

On 21 May, Australia rejected the divisive and self-serving politics that characterised the government of former Prime Minister Scott Morrison, but throughout the election campaign, there was a great silence: what must this wealthy country do to reduce poverty?

Both major parties failed to directly address the issue of poverty during the campaign. In signalling its support for an increase to minimum wage if recommended by the Fair Work Commission, the Australian Labor Party at least gave a nod to the urgent need to rethink the role of government in supporting those on lowest incomes, but poverty was not a priority in its own right.

Despite the new government’s focus on the cost of living and housing affordability, particularly the challenges facing those seeking to buy rather than those needing to rent, poverty slipped under the radar.

The ‘teal’ independents also failed to campaign on reducing poverty. These independents ran in historically ‘blue-ribbon’ Liberal seats, with few of their constituents facing the daily challenges of living in poverty.

More surprising was Labor’s disinclination to campaign on the issue of poverty, including the decision not to review the rate of Jobseeker and other government benefits – a reversal of the commitments it took to the 2019 election. 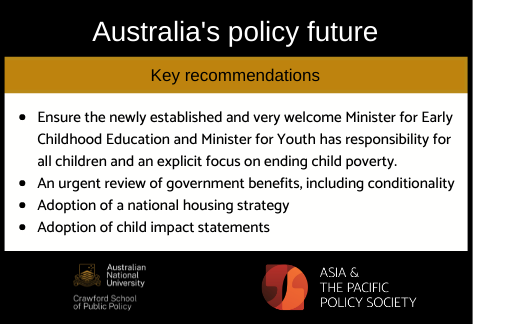 The adoption of the coronavirus supplements during 2020 demonstrated that income poverty can be significantly reduced by increasing welfare benefits.

Yet, the previous Morrison government chose to lower them again as the crisis eased, choosing to return many Australians to poverty.

Despite a small permanent increase from March 2021, people dependent on working-age benefits are still forced to live in poverty. There is a widespread recognition that this is not only a deep social injustice, it is also bad for Australian society and the economy.

New Prime Minister Anthony Albanese’s story is powerful and has shaped his life and his politics. In retelling his story, Albanese regularly pays tribute to his mum – a single mother who fought against the odds to raise him.

In my research with children growing up in poverty and disadvantage, similar tributes abound. One eight-year-old boy described his mum as ‘the best’ because she makes sure he has enough to eat when money is short, even when she is hungry herself.

A nine-year-old girl who so often felt scared because much about her life was tough described always feeling safe in her mummy’s arms. These are just two stories among many – children across Australia know their mums are heroes.

Children also talked of their dads, often mentioning the long hours they worked and their exhaustion. Many children said their mum and dad were often tired, under pressure, and worried. Young children could speak with authority about housing insecurity, precarious work, and welfare conditionality.

Australia is failing these children. Prior to the pandemic, one in six Australian children lived in income poverty.

Australia doesn’t have an official poverty line – something an incoming government committed to social justice and inclusion should address. The Organisation for Economic Co-operation and Development definition of ‘50 per cent of median income’ is commonly used, but working-age benefits in Australia are set below that level.

Currently, when Australians lose employment or cannot work, they are being sentenced to poverty. This is a policy decision. It is a decision that sadly reflects a hardening of policies and attitudes over the past decade across Australia.

From the cruel and punishing 2014 budget of the Abbott government and then-Treasurer Joe Hockey’s rhetoric of ‘lifters and leaners’, to the abuses of Robodebt and Scott Morrison’s inability to see Australia as more than an economy, Australia’s recent history includes a litany of blame for people experiencing poverty from their own government.

The last eight years have been a case study in the politics of division, and the abandonment of people who are labelled as failing to contribute and undeserving is one of its most serious outcomes.

Among children living in poverty, the largest proportion live with a single parent, usually their mother. Like Australia’s 31st prime minister, these children have the odds stacked against them.

Low income and housing instability create an ongoing sense of vulnerability among children. The concern that their parents will feel worse about their situation results in many children never asking to play sport, learn music, or go on school excursions and camps.

Low incomes do not only cause financial hardship, but also shape entire childhoods – it sends children strong and often destructive messages about their place in the world.

None of this means that children growing up in poverty won’t ‘make it’. As the prime minister said in his victory speech on election night, children can now look to him and see someone who went from public housing to the Lodge.

But it is not enough to say that all children can reach for their dreams despite their economic situation. In what is one of the wealthiest nations on Earth, it is time to reclaim Bob Hawke’s call to end child poverty.

This means transforming policy and a far greater focus on addressing poverty and on supporting children. It also means abandoning the politics of blame and stigma and addressing the structural barriers and systemic failures that create and perpetuate poverty.

The 2022 election results have the potential to trigger that transformation. During the campaign, Labor signalled that it would consider a package of support for people who are vulnerable. The Greens ran on ending poverty, and the universal provision of universal services. The successful independents, who ran on making government accountable to the people, can now ensure that accountability extends to those living in poverty. In his election night speech, incoming Prime Minister Albanese pledged to leave no one behind.

The political landscape in Australia changed on May 21 – with climate action and social justice now real possibilities. But the new parliament must not allow the great silence on poverty that characterised the campaign to continue. They must take this opportunity to create a fairer and more just society, where it is no longer considered acceptable for any children to grow up in poverty in Australia.

This piece was originally published as part of Policy Forum’s new feature section – In Focus: Australia’s policy future – which brings you policy analysis and ideas that go beyond the sound bites.