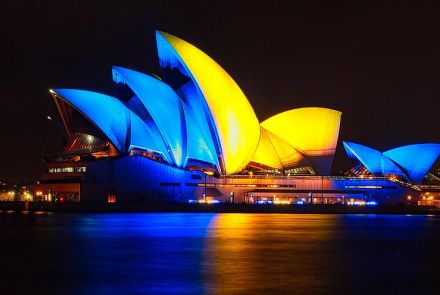 The invasion of Ukraine and its reconstruction demand decisive acts of solidarity from Australia and its regional allies – starting with a joint parliamentary committee to explore how Australians can help, William Stoltz writes.

Today, Ukraine President Volodymyr Zelenskyy will address The Australian National University (ANU) in Canberra, and the wider nation, in his latest effort to keep the Australian people alert to his country’s fight for survival.

While there is more Australia can do to aid Ukraine, the war is nevertheless a reminder of the limitations of Australian power and a signal that it needs to help revitalise the international institutions of collective security both countries rely upon.

President Zelenskyy has been relentless in his effort to keep the world alert to the struggle of his people. He has mastered the performance of being a wartime leader, with his rousing speeches and ‘bunker chique’ style of five o’clock shadow and muscle-top khaki t-shirts. The president has also been the ringmaster of Ukraine’s incredibly effective information fight.

While his address to ANU students and others across the nation will be aimed at breaking down the tyranny of distance separating the two democracies, the reality of that distance is clear.

Australia alone cannot project and sustain enough power to decisively affect the outcome of the war. Instead, it can only contribute as part of a global effort, to which cohesive multilateral partnerships are essential.

In this sense, the war in Ukraine is a reminder of a perennial challenge for Australia.

As a sparsely populated liberal democracy and free-trading nation, Australia has global interests that outpace its capabilities, meaning far-reaching international partnerships and institutions are required to help make the world safe for Australian interests.

It’s for these reasons that past Australian leaders played pivotal roles in shaping the United Nations (UN) and the League of Nations before it. It’s also why advocating reform to the UN and its related bodies needs to be adopted as a long-term project by the Albanese government.

Australian Labor governments have long touted their higher credentials over the Coalition for undertaking proactive internationalism, namely through a greater focus on multilateral institutions.

Current Labor parliamentarians can count among their forebears Herbert Evatt, a lion for smaller nations in the United Nations, Gough Whitlam, who normalised relations with Chairman Mao Tse Tung’s China, as well as the likes of Bob Hawke, Paul Keating, and Gareth Evans who all in their own way exercised cunning, creativity, and boldness to tear down trade barriers, stand up to injustice, or build bridges to new friends.

It is upon this legacy that many have welcomed the ascension of the Albanese government, believing that in keeping with this record Australia’s diplomatic corps will be bolstered and revived, and that, put simply, Australia will do ‘more’ to make the world ‘better’.

However, adopting a clear and robust agenda to strengthen international institutions will be essential to ensuring this government lives up to this Labor legacy.

In recent years, there has been a trend toward circumventing the shortcomings of the United Nations and other large multilateral bodies by turning to so-called ‘minilateral’ collective security groupings made up of a handful of nations with whom it is easier for Australia to agree.

This trend has included the revamp of the Quadrilateral Security Dialogue and the Five Eyes as well as the forging of new pacts like ‘AUKUS’, between Australia, the United Kingdom, and the United States.

But there are global challenges small groups like this cannot address alone, including aiding Ukraine in fighting against and recovering from Russia’s invasion. Ukraine was fortunate that dozens of nations from every region rose as one to support it in the first days of Russia’s invasion.

However, the decline of the UN as an effective collective security body means that the next time a smaller state is victimised by a bigger power, the international response may not be as unified or decisive. Exploring initiatives to improve the effectiveness of the UN, even if they seem unlikely to succeed, needs to be a constant part of Australian diplomacy.

In the meantime, there are other contributions Australia can make to Ukraine. In his speech to parliament in March, President Zelenskyy pleaded for Australia not to forget the enormous task of Ukraine’s reconstruction that lies ahead. He asked that governments and private firms “take patronage of a [Ukrainian] region, city, or industry of your choice”.

To take up his call, the 47th Australian parliament should establish a joint committee to explore how parts of Australia’s public and private sectors can best assist Ukraine in its post-war recovery.

While this might seem premature given the war still rages, putting in place a national plan for Australia’s contribution to Ukraine’s reconstruction will ensure any system is ready to go when the time comes.

Ukraine’s reconstruction will doubtless take decades and require the attention of dozens of states to avoid failure. States are at their most fragile, both economically and politically, at times like this.

Indeed, success in reconstruction will be as pivotal as military victory over Russia when it comes to ensuring the Ukrainian people can live in a free and prosperous nation for years to come. Australia has a duty to help.

Ukraine President Volodymyr Zelenskyy will address ANU and Australia via video link today at 5pm AEST. You can watch his speech online here.