Home » News and events » All stories » A river personified 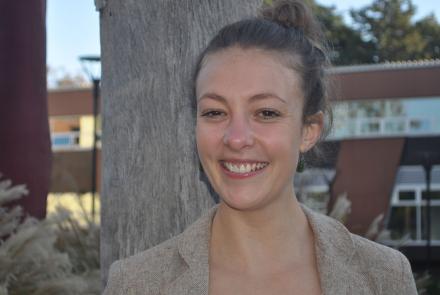 Julia Talbot-Jones is a PhD researcher in the Resources, Environment and Development program.

What would happen if a river was given legal standing, recognised as a ‘person’ before the court?

That scenario is being played out now in New Zealand, following a landmark decision in 2012 which gave the Whanganui River the right to be represented in court by legal guardians in a bid to protect its ecosystem’s health.

Crawford School of Public Policy PhD Scholar Julia Talbot-Jones is researching the potential implications of this decision on the management of the river and the communities that surround it.

“I want to understand why this new institutional arrangement has emerged for the management of the Whanganui River and how it differs from the traditional management approach. Is it likely to have an effect on peoples’ choices and preferences?” Talbot-Jones said.

“The Whanganui River, or Te Awa Tupua as it is now called, has always been important culturally to local Maori and has struggled with water quality issues for a long time.

“By giving the river legal standing, it recognises the river as a living whole and enables the river to have an independent voice. Ownership of the river has been vested away from Crown title and placed in the name of the river itself.

“Guardianship is to be appointed to two guardians - one from the Crown and the other from the local iwi - who will act on behalf of the river itself to protect its status, health, and wellbeing.”

Talbot-Jones says she was drawn to research this area because of its potential impact on resource management outcomes.

“Although New Zealand is not unique in giving nature legal rights, there seems to be very little economic analysis of the potential impacts,” she said.

“Virtually no work has been done yet on analysing this new institutional arrangement and certainly nobody seems to be asking what this might mean in terms of peoples’ behaviour.

“The traditional response to environmental problems has been to impose formal institutions through Leviathan control, private property right mechanisms, or devolution to community groups.

“But there are other options too. Identifying them and understanding their effects on the delivery of resource management outcomes is a fantastic opportunity for research.”

After her initial fieldwork, Talbot-Jones has been selected to go to Indiana University to undertake an exchange at the Vincent and Elinor Ostrom Workshop in Political Theory and Policy Analysis where she will analyse her results.