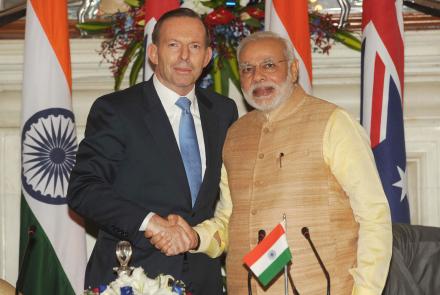 Prema-chandra Athukorala is Professor of Economics in Crawford School’s Arndt-Corden Department of Economics, Fellow of the Academy of the Social Sciences in Australia, and Honarary Professorial Research Fellow at the University of Manchester. He teaches Economic Development (IDEC8022).

Australia and China after their free trade agreement
Peter Drysdale on a big week in Asia Pacific economic diplomacy.

While the spotlight is currently on Brisbane’s G20 meetings, next week in Canberra is forecast to be historic for Australian foreign trade, according to Crawford experts.

Amid expectations of an Australia-China free trade agreement (FTA) and September’s uranium trade deal with New Dehli, President Xi Jinping of China and Prime Minister Narendra Modi of India will both address the Australian Parliament.

Mr Modi will be the first Indian Prime Minister to visit Australia since Rajiv Gandhi in 1986 and the first to address a joint sitting of Parliament.

ANU Chair in Public Policy, Professor Warwick McKibbin says this is of both symbolic and real economic and political importance.

“The presence of both leaders to address the Australian parliament in tandem with the G20 meetings in Brisbane shows how well Australia’s foreign policy has been managed in the past year,” he said.

“It is critical for Australia’s economic and political interests to have good relations and work with these countries and their leaders in shaping the global institutions to enhance our future economic growth and prosperity.”

But Professor Prema-chandra Athukorala, of Crawford’s Arndt-Corden Department of Economics warns that the role of FTAs with these emerging economies is often overstated.

“The potential gains from signing FTAs with China and India have been vastly exaggerated in the contemporary Australian foreign policy debate,” he said.

“The Emerging Economies, particularly China and India will be shaping the world economy in the 21st century. However the future is not predetermined and there are many economic and political barriers that could destabilise the world community,” McKibbin added.

Are you interested in the ideas in this piece? Warwick McKibbin teaches Modelling the World Economy: techniques and policy implications (IDEC8127) and Prema-chandra Athukorala teaches Economic Development (IDEC8022).