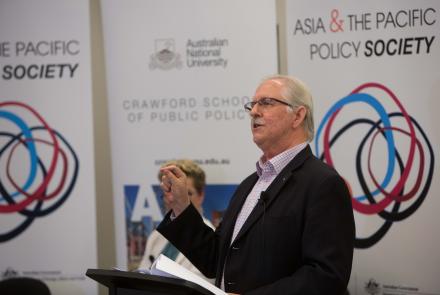 Crawford School Professor of Economics Glenn Withers has been appointed President Elect of the Academy of the Social Sciences in Australia (ASSA).

Professor Withers is one of Australia’s leading experts in the economics of public policy.

“I’m honoured to have been appointed and hope to use this position to continue to enhance recognition and support for the social sciences in Australia,” Professor Withers said.

ASSA promotes excellence in the social sciences and their contribution to Australia. It coordinates the promotion of research, teaching and engagement, as well as providing advice to government and the wider society on issues of national importance.

“I will be very pleased to have such a platform to keep emphasising the contribution made by the social sciences,” he said.

“To properly understand our own and other societies, economies, institutions and cultures, where they come from and where they are trending, is crucial.

“I would also see ongoing engagement through the Academy with early career researchers and interaction between the Fellows as key priorities.”

Professor Withers recently co-edited The Cambridge Economic History of Australia and is Chair of the Expert Working Group into ‘Australia’s Comparative Advantage’, the first project in a multi-disciplinary Learned Academies’ program on ‘Securing Australia’s Future’.

He has chaired Commonwealth Inquiries into Infrastructure Financing, Population Issues and Australia’s Future, and was Co-Commissioner for the Productivity Commission’s Stocktake of Micro-economic Reform.