Home » News and events » All stories » A change for the better 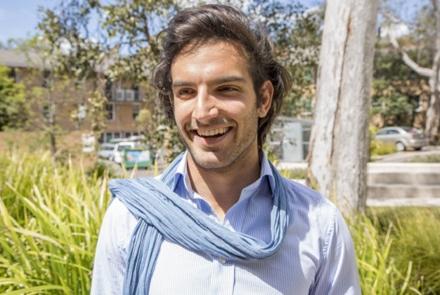 A change for the better

Meet Alexandre Dayant, a student who wants to bring positive change to the world through his Masters of International Development Economics.

Alexandre Dayant has studied at the Sorbonne and at Harvard, so he knows a good university when he sees one.

“When I arrived at ANU, I was thrilled,” he says.

“The teachers we have here are very, very good, especially at Crawford School of Public Policy, which is well-ranked in the world among the schools of public policy and economics. In comparison to France, you have very close contact with your teachers. Beyond the basic contact in class, you can go and have a conversation with them very easily.

“And the Harvard campus is very nice, but to be honest, the ANU campus is amazing. It’s enormous and very green.”

Alex is studying a Master of International and Development Economics at Crawford School of Public Policy, a program he chose after deciding he wanted to move away from banking and finance to work in development.

“With the knowledge I have on public policy and economics, I have a broad picture of how the world works. I want to use this knowledge I’ve accumulated to work on projects that are helpful to the planet and the population. Maybe it sounds utopic, but I am young so I believe we can change things.”

As part of his program, Alex participated in the University’s Australian National Internships Program, which placed him with Brendan O’Connor, Minister for Housing, Homelessness and Small Business at Parliament House.

“I had to find a new policy to better promote small business in Australia,” Alex says. “I compared Australia to other countries in the world and found some policies we could apply, and did some simulations about how it might work, and how much it would cost. It was a big project, and I had to present my paper to the Minister.”

Alex says alongside opportunities such as this, one of the benefits to studying at Crawford School is its “cultural diversity.”

“We have an amazing percentage of international students. Arriving here was the first time I met someone from the Marshall Islands or Indonesia, for example. My point of view has been broadened and I’m much more aware of the different cultures from around the world.”

Alex says is also keen to help international students to find opportunities to interact with local students. For this reason, he’s actively involved in the ANU Postgraduate and Research Students’ Association as its Social Officer.

“I organise all the events for the students’ association. One week ago I organised a surf trip with sixty people, two weeks ago we did sheep shearing on a farm. These are cultural aspects that all the international students want to see, in order to experience Australian culture.”