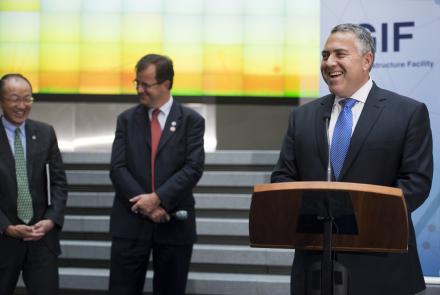 Essential to reform the structure and financing of our governments

Former Federal Opposition Leader Dr John Hewson AM is Professor and Chair in the Tax and Transfer Policy Institute at Crawford School of Public Policy.

A year of volatility
What's in store for Australia and the region in 2015?

The release of two important documents this week are an opportunity for reform that we cannot squander, writes John Hewson.

Two important documents were released this week that emphasised the urgency of the need to reform the structure and financing of our governments.

The Abbott Government released MYEFO – The Mid-year Economic and Fiscal Outlook – that essentially conceded that, despite all the rhetoric, promises and politicking of recent years, we can expect the Budget to be in deficit almost as far ‘as the eye can see’.

The Paris based OECD also released their latest Survey on Australia, that focused in on, among other issues, the significance of tax reform, highlighting in particular the need and scope for more revenue to be raised from the GST.

Rather than the almost manic obsession of recent years and governments to make a commitment to ‘achieve a budget surplus by a particular future date’, Treasurer Joe Hockey essentially argued that, given the current and prospective weakness of our economy, it was now more important to accept the budget as an ‘automatic stabiliser’, accepting a larger budget deficit, for longer, as a means of ‘cushioning’ that weakness.

Only some seven months since he had delivered his first budget, then to deal with the ‘debt and deficits disaster’, the ‘budget emergency’ (how many times have you heard that?) left from the Rudd/Gillard/Rudd era, Hockey admitted that the deficit for this year had already blown out by more than one third, and that any move back to surplus would, and should, now be delayed.

In simple terms, he admitted that he had been too optimistic about our economic prospects back in May, and that any further cuts in expenditure and/or tax increases now would only further compound the weakness of our economy.

It also recognised that he had burnt so much political capital back in May, for no real gain, that the Government now had very little capacity to come back with another dose of fiscal austerity, especially as it now sits well behind the Shorten Opposition in the polls.

However, despite this sort of mea culpa I doubt they have got the assessment of our economic prospects right, even now.

For example, one reason why their forecasts back in May proved incorrect is the iron ore price, and the terms of trade more generally, had been much weaker than Treasury had predicted. Yet, they now predict that that price will stay at the recent level of US$60 per tonne, for the rest of the four-year budget period, something I can guarantee you won’t happen.

The OECD emphasised that, by the average of the OECD member countries, Australia collects far too little revenue from indirect taxes such as the GST, only about 7 per cent of GDP, compared with their average of some 12 per cent.

Hence, we have the ‘capacity/need’ to broaden the base of the GST and to increase the rate form 10 per cent to between 15 and 18 per cent.

Like it or not, if Government is to meet all its expenditure commitments in health, education/school reform, disability care and infrastructure, for which there seems to be considerable community support, while lowering personal and corporate tax, it will need to increase taxes somewhere if it ever hopes to bring the Budget back under control.

There are two key stages to this. First, reform of government spending, at both State and Federal level, to maximise efficiency and eliminate duplication, by a once-for-all reallocation of spending/policy responsibilities. This should see a significant reduction in aggregate government spending.

Second, then a debate about tax reform, about the most effective system to finance this spending.

It is, therefore, imperative that the Government’s promised two White Papers on Federation and Tax Reform be substantive, and form the basis for a ‘mature’, and essential, public debate.

It is not an opportunity that we, as a nation, can afford to squander.

Read more about Economics and Finance policy at Policy Forum. Essential to reform the structure and financing of our governments was published at Policyforum.net – the website of the Asia and the Pacific Policy Society.

This piece was published in Southern Highland News.