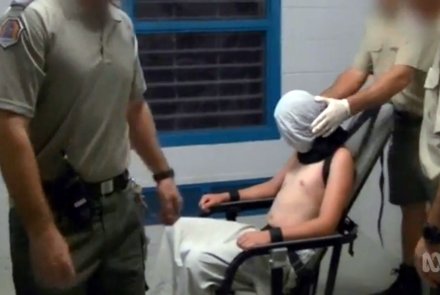 Violating the rights of the child

Sharon Bessell examines Australia’s shameful history of brutalising children within institutions and what must be done to put an end to it, once and for all.

The ABC’s Four Corners exposure of the brutal treatment of children being held at the Northern Territory’s Don Dale youth detention centre has rightly prompted shock and disbelief. Northern Territory Chief Minister Adam Giles described being ‘shocked and disgusted’, Prime Minister Malcolm Turnbull announced a Royal Commission to investigate the treatment of children in detention (but only in the Northern Territory), and – so far – one Minister (the Territory’s Corrections Minister, John Elferink) has been sacked. The violence and inhumanity revealed by Four Corners are indeed, as the title of the documentary claims, ‘Australia’s Shame.’

But while we should be disgusted by the images of children being brutalised, we should not be shocked. What has been happening at Don Dale is certainly extreme, but it is not exceptional in terms of the treatment of children in institutions in Australia.

The show aired footage of boys at Don Dale being physically attacked by adult guards, forced to the ground by multiple guards and stripped naked, tear gassed, and held for prolonged periods in isolation without water, natural light or adequate space. Footage of a teenage boy stripped to the waist, masked by a spit hood and strapped to a restraining chair is reminiscent of a torture chamber. Yet, under the Northern Territory’s Youth Justice Amendment Bill 2016, the restraint of children in this way is permissible.

Many aspects of the Four Corners program are deeply disturbing; and two particularly so.

First, the treatment of children in this way in Don Dale was known to Northern Territory authorities long before the Four Corners program went to air. Reports in 2012 and 2014 identified abuse in Don Dale. In August 2015, Northern Territory Children’s Commissioner, Colleen Gwynne, formally reported on the abuse of children in Don Dale to John Elferink, Minister for Children and Families and Minister for Correctional Services. Gwynne’s report noted that the recommendations of the previous NT children’s commissioner, made in 2012, had not been implemented. The responsible Minister was well aware of practices at Don Dale.

Moreover, as noted above, an amendment to the Youth Justice Act allows for children as young as 10 to be tied down with cables and subjected to restraint chairs. Here, we have a parliament agreeing to use force against children that is a breach of international human rights treaties.

Ironically, the use of such force was justified as being in children’s best interests when they were likely to self-harm. The idea that angry, troubled and traumatised children are best ‘protected’ by being shackled is staggering. While claims of child abuse in Aboriginal communities almost a decade ago triggered the Northern Territory National Emergency Response, the amendment that legalised the shackling of young children slipped quietly into law last month.

Despite media reports of both the amendments to the Youth Justice Bill and of ongoing allegations of abuse in Don Dale, neither the Northern Territory nor Commonwealth Governments acted. Indeed, in the wake of Four Corners, federal Minister for Indigenous Affairs, Nigel Scullion responded to journalists’ questions about his lack of action by saying that while he had been vaguely aware of allegations, his interest ‘wasn’t piqued’. It is not the lack of knowledge that should worry us, but the lack of action in the face of knowledge.

Second, the behaviour and attitudes of the workers at Don Dale, captured on CCTV, should leave us cold. We see no sign of workers trying to calm highly distressed children, we see no concern for the children’s well-being, and we see no human empathy. What the footage reveals is a ghoulish and sadistic response, including laughter, to the obvious suffering of children.

Attorney-General George Brandis described the behaviour of the workers as “a woeful failure to train and educate the officers administering these juvenile detention centres as to what is acceptable conduct and practice.” This is no doubt true. Yet the idea that workers who had a duty of care towards vulnerable children need to be trained not to abuse them – and not to then laugh at their distress – is a disturbing one.

The terrible practices at Don Dale reveal institutional failure and a lack of accountability at all levels: governments, responsible departments, Don Dale managers, and Don Dale workers. They also reveal inhuman attitudes towards the children incarcerated within the institution.

I began by claiming that we should not be shocked by the treatment of children at Don Dale. I say this, not because the revelations are not in themselves shocking, but because Australia has a shameful history of brutalising children within institutions. The experiences of the Forgotten Australians and the Stolen Generations demonstrate the appalling treatment of children within institutions in the past. The Royal Commission into Institutional Responses to Child Sexual Abuse has, over the past three years, revealed the breadth of institutions within which children have been abused – and the extent to which many institutions have gone to cover-up and protect adult perpetrators. The treatment of child asylum seekers, well documented in reports by the Australian Human Rights Commission and others, demonstrates a deep lack of compassion for children who are the most vulnerable and the most traumatised.

A series of inquiries over many years, from the Commission of Inquiry into Abuse of Children in Queensland Institutions in the 1990s to the ACT’s 2005 Human Rights Audit of the Quamby Youth Detention Centre, have identified serious violations of children’s human rights in both care and protection institutions and in youth detention centres.

In some cases, including both Queensland and the ACT, inquiries resulted in significant policy reform. Yet, we continue to fail the most vulnerable children: those who end up in the care of the state – either through the care and protection system or through the justice system (and very often the same children are engaged in both systems). So where do we go from here? How should governments, support organisations, communities and individuals respond?

We must begin by confronting and addressing two realities.

First, policies and institutions are failing the most vulnerable and marginalised children in Australian society. These institutions are particularly failing Indigenous children, who are seven times more likely to be in out-of-home care and more than 20 times more likely to be in youth detention than other children. Socio-economic disadvantage, deeply entrenched racism and the legacy of dispossession and the removal of Indigenous children from their families all contribute to explaining this gross reflection of inequality.

Vulnerable children are failed in two ways. On the one hand, social and economic policies are not providing the most disadvantaged families with the support they need to raise their children. Growing inequality is unlikely to see this situation improve. On the other hand, once in ‘the system’, children’s lives are often characterised by powerlessness and further marginalisation. In 2012 the Australian Institute for Health and Welfare highlighted what other research has also pointed to: there is a strong intersection between homelessness, involvement in the child protection system, and involvement in the juvenile justice system.

Second, the treatment of marginalised children – those in youth detention, those in out-of-home care, asylum seekers – by the state has been in history and remains abhorrent. However, the state can only perpetrate outrages against a particular group if community attitudes allow it. If we are to prevent the abuse that has occurred in the Northern Territory, we must seriously question why the status of some children is so low that society permits institutionalised abuse. The abuse of the boys at Don Dale became public – much does not. Australia ratified the UN Convention on the Rights of the Child in 1990 – it is time we took seriously our obligations to children whose lives are lived in institutions away from public view and community or familial support.

Nelson Mandela famously said ‘there can be no keener revelation of a society’s soul than the way in which it treats its children.’ It is time for Australians to do some serious soul-searching.