Home » News and events » All stories » The problem with cheap petrol 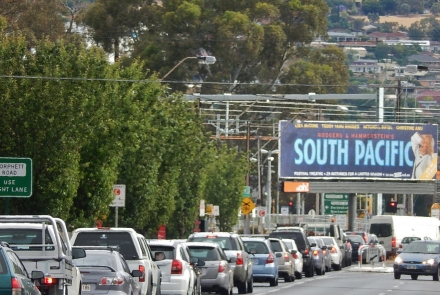 The problem with cheap petrol

A chance for lift off: Indonesia’s solar sector

The economist behind a new study into traffic and fuel prices has urged countries to continue their progress toward eliminating fossil fuel subsidies. He has also drawn attention to the need for Australia to move to a GPS-based road funding system.

Dr Paul Burke of Crawford School of Public Policy said his research, based on a case study of Indonesia, found petrol subsidies played a significant role in creating transport problems such as traffic jams.

“Quite a few cities in our region, including Jakarta, are developing in a car-centric way. This is what we would expect when fuel has been sold at a low price.”

In a sequence of reforms in 2013 and 2014, Indonesia implemented rapid increases in fuel prices to reduce subsidy spending. The study analysed data from 19 toll roads over the period 2008–2015 and found that increasing the price of fuel helped to ease growth in road use.

“We estimate that there are currently around 10 per cent fewer vehicles on the roads in our study as a result of Indonesia’s fuel price reforms. The traffic flows more freely than it would have without the reforms,” Dr Burke said.

Dr Burke said that continuing the fuel subsidy reform process was important for Indonesia and other fuel-subsidising countries.

“The complete elimination of fossil fuel subsidies would help economies develop in a more environmentally-friendly way, and with fewer traffic jams.”

In Australia, road users pay a fuel excise of 40.3c per litre. Collections of excise for petrol and diesel bring in around $16 billion per year.

“If you are driving into the Sydney CBD at 8am on a Monday, you’d be charged a road-user charge. If you’re driving in an area with little traffic you would pay much less per kilometre travelled,” he said.

“The advantage of this system is that it can help to ease traffic hotspots, which cost the economy billions of dollars a year. The idea is not to increase total tax collections, but to adopt smarter taxes that will be suitable in the age of electric vehicles.”

The study on Indonesia has been published in Transportation Research Part A: Policy and Practice. It can be read here: http://www.sciencedirect.com/science/article/pii/S0965856416308102