Home » News and events » All stories » Media challenges in PNG 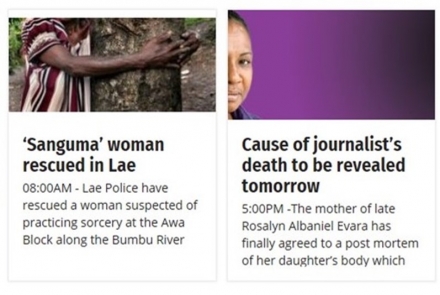 It was a shocking week, even in what seems to be the ‘norm’ of gendered violence in PNG. Norms are so entrenched that without thinking many people become silenced, largely because of the despair that it so difficult to change anything. On October 14, a prominent journalist, the late Rosalyn Albaniel Evara, passed away in Port Moresby. At her funeral last week allegations emerged that she had been subjected to domestic violence. Simultaneously unfolding was another harrowing incident of sorcery related violence in a settlement in PNG’s other major urban centre, Lae in Morobe Province. One woman narrowly escaped death when the police intervened while another woman was found dead the following morning in what police believe might be a related incident. All three incidents, along with other stories depicting the kinds of stress that the police in PNG face, can be seen in the first 15 minutes of this report.

Why is this week any different? This week marks a pivotal moment in media coverage of gender violence in Papua New Guinea. It is a point when the stark realities facing PNG journalists were foregrounded, leading many in the industry to reflect critically on the ethics of the media in reporting gender based violence. But importantly, the fact this happened at the same moment that the sorcery related violence in Lae occurred also opens up other questions about the role of the media and the powers we can unintentionally or intentionally exercise in our individual and collective silences.

During her funeral, the late Rosalyn’s bereaved aunt broke the silence, publically alleging that Rosalyn had been the victim of domestic violence and expressing remorse that she had not done more to help. In doing so, with images of the deceased’s bruised body, she cast a powerful spotlight onto the journalist’s life; from being a journalist who told ‘others’’ stories to the ‘other’ whose important story needed to be known.

This triggered a series of debates and outrage, including calls for an investigation; reflecting on their own ethics in journalism; and interventions by numerous people including colleagues and friends. One news article reported that the national minister for Religion, Youth, and Community Development called for a proper investigation into her death, and that the Governor of Port Moresby had intervened to ask for a post mortem to be undertaken. In another report the media council of PNG also called for an investigation.

This piece was first published on 1 November 2017 by Devpolicy Blog from the Development Policy Centre, to read the full post, please visit: http://devpolicy.org/media-challenges-as-papua-new-guinea-fights-gendere...