New Caledonia has become the latest part of the Pacific Islands region to suffer a major outbreak of COVID-19. 3,603 cases have been now been recorded in the territory, 3,467 of which were identified in the past 14 days. 25 deaths have now been attributed to the virus, all of which are as a result of this current outbreak. COVID-19 was first detected in the community just over two weeks ago, after three separate individuals with no recent travel history each tested positive.

American Samoa has lost its virus-free status, after a passenger onboard a flight from Hawai’i tested positive. The individual is in managed isolation. 44,612 cases and 599 deaths have been recorded in French Polynesia, however, the government has not been regularly releasing case numbers since August, meaning the true figure is almost certainly far greater. 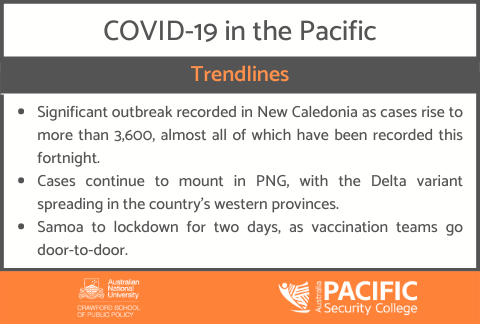 PNG’s two western provinces, which border Indonesia, continue to record significant case numbers and an increase in COVID-19-related deaths. It’s now believed that the rising case numbers along the western border are resulting in an overflow effect, with an increase in infections in other parts of the countries.

This includes major cities, such as the capital Port Moresby, indicating that the virus is being transmitted across the provinces. There are concerns that national Independence Day celebrations this fortnight may have led to an increase in mobility, spreading the virus and leading to a potential future spike in cases.

The increase in case numbers around the country is putting the nation’s health infrastructure under increased strain. Both the Goroka Hospital and the Port Moresby General Hospital isolation wards are now full, while an ancillary field hospital has been re-established to treat moderately ill COVID-19 patients in Port Moresby.

With demand building, medical professionals have spoken out about the lack of equipment and supplies provided to hospitals. Three medical staff from Daru Hospital in Western Province have passed away in the past fortnight from COVID-19.

The PNG Government has responded to the increased level of concern by implementing new, stricter rules for passengers arriving in the country. Under the new rules, no unvaccinated foreign nationals will be allowed to enter PNG.

Analysis from the International Monetary Fund this fortnight indicates that the COVID-19 pandemic is having a ‘two-track’ global effect, with vaccine access in developed countries far exceeding that of the developing world.

A journalist for Australia’s Sydney Morning Herald newspaper wrote that the contrast between full-vaccination levels in Australia, and its nearest neighbour, PNG, is perhaps the starkest demonstration of this anywhere in the world.

There are concerns that PNG will become a ‘pariah state’ due to its persistently low vaccination coverage. In a worrying indication of the level of vaccine hesitancy in PNG, the government has agreed to hand over 30,000 AstraZeneca doses to Vietnam, rather than let them go to waste.

The remote, smaller islands continue to account for increasing proportions of Fiji’s new COVID-19 cases. 521 cases have now been discovered on the island of Kadavu, with over 800 on smaller islands in the country. In response, the Fiji opposition called on the government to focus vaccination efforts on remote parts of the country.

Containment zone restrictions have now been lifted on the main island of Viti Levu, after double dose vaccine coverage passed 60 per cent. With rural and regional vaccination rates trailing those of major towns and cities, the Fiji Government will publish vaccination rates of all areas along major roads, in an effort to encourage travellers to avoid stopping in townships with low vaccination rates.

Fiji’s Health Secretary Dr James Fong said that COVID-19 vaccinations have been deemed safe for children aged 15 – 17 years, with the Moderna vaccine to be utilised for this age group. Meanwhile, online classes have been disrupted in Fiji, with teachers in Central Division called upon to assist vaccination efforts. While Australia and New Zealand Medical Assistance Team workers have now returned home, the Fiji Government has appealed for assistance with the effects of long-COVID.

The Fiji Council of Social Services claims more government assistance is required for mental health services, stating that the “far-reaching and multidimensional impact [of the pandemic] on communities” has contributed to 47 suicides from January to July 2021.

A snap two-day national lockdown has been called in Samoa for Thursday 23 September and Friday 24 September, as the expiration date of AstraZeneca vaccines approaches. Mobile vaccination teams will go door-to-door for the two days, with the goal of inoculating 99 per cent of the country’s population. First dose coverage in Samoa is currently 84 per cent. The Chamber of Commerce has appealed to government for more financial assistance for businesses.

Around 2,500 people have protested against mandatory vaccinations in Tahiti. The protests come as concerns mount that many COVID-19 deaths are not being recorded.

Briefly, public servants in Solomon Islands who have not been vaccinated by 31 October will be stood down on half pay while a Tourism Restart Program has been announced in Kiribati, with the goal of reopening borders from January 2022.

Additionally, Cook Islands authorities have approved vaccinations for those aged 12-15 years and New Zealand has recommitted to a one-way travel bubble for Pacific seasonal workers from October.