Fiji has taken the first step in reopening its international borders, and Papua New Guinea has seen a reduction in new official case numbers.

Papua New Guinea (PNG)’s COVID-19 outbreak has improved slightly since the last update, with the country recording 812 cases in the past week, bringing the total number of cases to 32,985, and deaths to 436. Transmission in New Caledonia appears to be decreasing, with 270 new cases in the previous seven days.

Tonga’s first case of COVID-19 since the pandemic began has been labelled a weak positive by doctors, and not deemed a major risk to the Kingdom. More than 300 passengers and frontline health staff, however, remain in 21-day isolation.

Here is a snapshot of policy responses to COVID-19 in the Pacific region, correct as of 12pm AEDT, 17 November 2021. 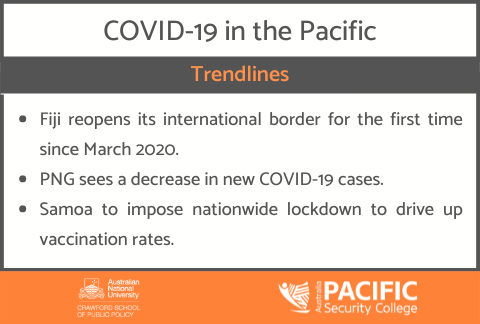 Fiji has officially opened its international border on 11 November. However, only fully vaccinated diplomats, returning Fiji residents, permit holders and approved visitors will be allowed in, after spending three days in quarantine.

Australia’s Minister for International Development and the Pacific, Zed Seselja, was one of the first people to visit the country under the eased border restrictions. Fiji is gearing up for a broader reopening on 1 December, with resorts fully booked and Fiji Airways expecting 30,000 visitors in the opening month.

While a 90 per cent vaccination rate was expected to be reached last weekend, logistical issues in Fiji’s remote areas stifled efforts. Once the country has attained 90 per cent vaccination, curfew restrictions will be reduced from midnight to 4am. Furthermore, a reduction in cases and high vaccination rates has meant the Fiji Government has lifted all quarantine measures for domestic travel. However, only fully vaccinated passengers are allowed to travel.

The focus of Fiji’s rollout is starting to shift towards young people, with vaccination for children aged between 12-14 years beginning this week. According to Fiji’s Health Ministry, 23,215 students aged 15-17 have been fully vaccinated. Teachers who do not receive their second vaccine dose by the end of next week may face termination.

The PNG Government has officially requested humanitarian assistance from partner governments to respond to the continuing health crisis caused by the Delta variant. New Zealand announced that it will be sending a medical and logistics support team to assist the nation in stopping the spread of COVID-19.

In good news for PNG’s capital, cases at Port Moresby General Hospital have decreased in the past fortnight. The Hospital has also announced that it will be restoring many of the medical services stopped at the height of the outbreak, as the positive rate of cases decreased to 54 per cent. Overall, 120 medical staff at the hospital have tested positive for COVID-19 during the outbreak.

Misinformation and violence against vaccine workers continue to hinder the vaccine rollout in PNG. Just 1.7 per cent of the population are fully vaccinated, despite adequate supplies of vaccine being available.

Although there has been a decrease in hospital admissions in Port Moresby and at Mt Hagen General Hospital, many provinces including Central Province, Madang and Enga Province, have reported an uptick in cases and hospitalisations. Additionally, medical oxygen use in the country is at an all-time high, placing pressure on suppliers and authorities to increase supply as demand continues to rise.

Tensions surrounding PNG’s pandemic response have been escalated by a verbal stoush between the Health Minister Jelta Wong and the former Health Minister and opposition member Elias Kapavore. Minister Wong condemned Mr Kapavore, alleging that he used a “misleading” claim that only one per cent of COVID-19 patients failed to recover from the virus, whilst Mr Kapavore argued that the government should place a greater emphasis on launching the National Health Plan for 2021-2030.

Furthermore, authorities in Bougainville have stated that there are no plans to extend the current two-week lockdown put in place to stop the rising COVID-19 cases in the province. An estimated 170 people have contracted the virus in the past month, and 10 people have died.

Samoa has announced a nationwide lockdown starting Friday 19 November, in efforts to attain 99 per cent vaccine coverage. Currently, 95 per cent of the eligible population have received a first dose, and 70.5 per cent are fully vaccinated. Businesses and government offices will not be affected by the lockdown, as the country pushes for 95-99 per cent vaccination coverage before opening their international borders.

Solomon Islands received a supply of Pfizer vaccines on 16 November through the United States government and COVID-19 Vaccines Global Access program. The vaccines will be used on children aged between 12-18, and those who are pregnant. The country’s current vaccination rate is 14.3 per cent. Meanwhile, 57 per cent of Tonga’s eligible population have been fully vaccinated, well on the way to its target of 70 per cent by the end of 2021.

In Vanuatu, the Ministry of Health is in preliminary discussions to vaccinate people under the age of 18, with the last province in the country Torba, commencing its vaccine rollout last weekend.

An essential worker in the Northern Mariana Islands has been identified as the source of the latest outbreak. According to authorities, cases are multiplying in households with children still ineligible to receive the vaccine. 80 per cent of the population has been fully vaccinated, and children aged 5-7 are now eligible to receive a vaccine dose.