Papua New Guinea (PNG) is hurtling toward 10,000 known COVID-19 cases, with 9,952 cases now confirmed in the country and 91 deaths. Despite the rapid increase in identified cases, health authorities continue to caution that the actual spread of the virus is likely far greater than official figures indicate due to chronic low testing. The detection of 26 cases in Manus province mean that COVID-19 has been identified in every province.

Fiji recorded its first case of COVID-19 outside border quarantine in 12 months. A border quarantine worker in Nadi has returned a positive result and Lautoka and Nadi are being place under lockdown, with reports three cases have now been found. 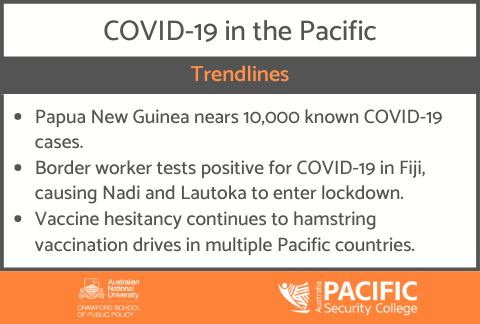 32,000 vaccinations have arrived in PNG this fortnight through the COVAX facility, enabling the vaccine campaign to begin in every province according to Health Minister Jelta Wong. According to Health Secretary Osborne Liko, nine hotspot destinations will be prioritised to receive the jabs, including the following provinces and regions: Western, West Sepik, Morobe, East New Britain, Eastern Highlands, Western Highlands, West New Britain, Bougainville, East Sepik, Chimbu, New Ireland, and Madang.

Another 588,000 doses are expected to arrive in the country during May and June. While 1,600 people have now received their first injection, PNG’s communications minister expressed concern over the continued circulation of disinformation on social media.

PNG’s health infrastructure continues to feel the weight of the COVID-19 pandemic. East New Britain province is now in lockdown until May, with workers at St Mary’s Hospital in the province saying they do not want to return to work for fear of being stigmatised, forcing the hospital to suspend all operations other than the emergency department.

Meanwhile, the largest hospital in the Highlands region at Mt Hagen has foreshadowed further reductions to its operations, after 70 frontline staff contracted the virus and were forced into isolation. In the Eastern Highlands province, one quarter to one fifth of all samples are returning a positive test result. The Port Moresby General Hospital morgue has now reached capacity.

In response to the ongoing health strain, Australia has deployed Australian Medical Assistance Team (AUSMAT) specialists to PNG, as well as 40,000 rapid testing cartridges. Also arriving in PNG were a group of emergency workers from Germany. More than 75 per cent of Australians say the COVID-19 situation in PNG concerns them, and wish to see more assistance from Australia to its northern neighbour.

Vanuatu is waiting on additional tests to confirm that the dead body of a Filipino sailor which washed ashore in Port Vila is COVID-19 positive, as the government orders travel restrictions between Efate island and the rest of the country.

The World Health Organization (WHO) recommended that Pacific Island countries continue to use the AstraZeneca vaccine, despite some European countries limiting its use and the Australian Government changing its advice around administering the vaccine to people under 50-years-old, due to a possible link to a rare but serious side effect.

The WHO said PNG’s struggle with COVID-19 underlines the need for vaccine equity.

Vaccine misinformation continues to be a significant roadblock in the Pacific Island region. In Solomon Islands, Permanent Secretary of the Health Ministry Pauline McNeil said that turnout of frontline workers for vaccination remains very low. Only 400 people arrived in the second week of April for vaccination, meaning that under 43 per cent of the country’s COVAX supply has been administered.

In response, eligibility has been expanded to people over the age of 40 who have underlying health conditions. Solomon Islands has received a shipment of 50,000 vaccines from China. Conversely, authorities in Fiji report that vaccine hesitancy is wearing off as more people get vaccinated successfully.

In other vaccine news, Vanuatu’s vaccination rollout strategy has been detailed, with jabs expected to be delivered on Efate to frontline and healthcare workers, as well as those aged over 55, from late-April. Tonga’s Princess Pilolevu Tuita was the first Tongan to receive an AstraZeneca vaccine after 24,000 doses arrived on 31 March. A vaccination drive to frontline workers on Tongatapu has now begun.

Tuvalu has received its first 4,800 doses of AstraZeneca through the COVAX facility. 700 people in Nauru have received their first injection. Marshall Islands and Northern Mariana Islands have halted use of the Johnson & Johnson COVID-19 vaccine on advice from the US Centres for Disease Control. More than 75 per cent of urban Marshallese have already received their first injection.

Briefly this week: Australian High Commissioner to Fiji John Feakes ruled-out any progress on a travel bubble between the two countries until the virus is further suppressed in Australia; New Caledonia has emerged from lockdown, as new cases stabilised following the March outbreak; and Australia is providing US$873,000 to help Vanuatu develop and implement a tourism recovery plan.