Fiji’s government has claimed that 96.9 per cent of the country’s target population has now received one vaccination dose, Hugh McClure writes.

French Polynesian authorities are now no longer publicly announcing COVID-19 case numbers, as the deadly Delta strain outbreak continues to worsen across all of the territory’s 45 islands. 42,109 cases had been announced before authorities stopped revealing numbers on August 31, with 513 deaths confirmed, an increase from 353 deaths this time a fortnight ago. The lockdown has been extended until September 20.

Papua New Guinea’s (PNG) Delta strain outbreak has continued to worsen, particularly along the country’s border with West Papua. 329 cases have been confirmed this fortnight, bringing the country’s total to 18,276 across the pandemic. Low testing rates mean the true figure is almost certainly far greater.

New Caledonia is back under lockdown, after three unlinked cases were identified this fortnight. It remains a mystery as to how the three people contracted the virus.

There has been a significant increase in cases in Guam over the past two weeks. 1,428 cases have been recorded over the past 14 days, bringing its total to 10,566 cases and 151 deaths. This is despite more than 70 per cent of people in Guam having received one vaccine dose.

Here is a snapshot of policy responses to COVID-19 in the Pacific region, correct as of 12pm AEST, 8 September 2021. 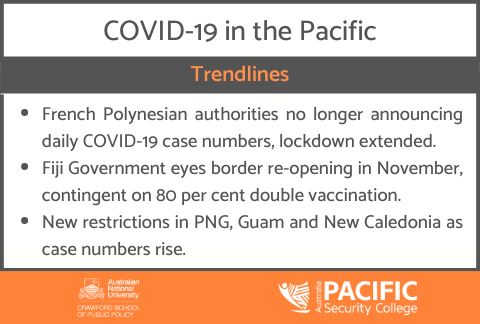 Fiji Prime Minister Frank Bainimarama and Permanent Health Secretary Dr James Fong have confirmed that authorities are working towards a 1 November re-opening of Fiji’s border, provided the country clears the 80 per cent double vaccination threshold. Fiji’s COVID-19 vaccination rollout has continued at a startling pace, with the Fiji Government reporting that 96.9 per cent of the country’s target population has now received one dose, while 52.6 per cent are fully vaccinated.

Guardian Australia reported on the significant efforts taken to get vaccines into remote parts of the country, with vaccines arriving on horseback to some communities.

Approximately 200 Fijian teachers have been fired for failing to get vaccinated, after the country’s controversial mandatory vaccination policy took effect. Although new case numbers in Fiji continue to decline, the country’s positivity rate remains at 19.7 per cent, four times that at which the World Health Organization deems an outbreak to be out-of-control, indicating significant levels of community transmission.

While the Suva-Nausori corridor was formerly the centre of Fiji’s COVID-19 outbreak, the country’s outer islands and remote areas are accounting for an increasing number of the new cases recorded. New cases are regularly reported in each of the country’s four divisions, with more cases now regularly reported in Western Division than in Central Division – where Suva is located.

In response, a 55-member team has been sent to Kadavu, where 164 people have tested positive. Meanwhile, the Namara Tiri settlement, the second largest town on the island of Vanua Levu, has been placed into lockdown.

Amidst the surge in delta variant cases in the western part of the country, PNG Deputy Pandemic Controller Dr Daoni Esorom emphasised that the infection rate in the region is increasing. Travellers will now be required to obtain a negative test result before they leave Western Province. Dr Esorom blamed the outbreak on people crossing the border form West Papua.

“We kept warning our people not to cross the border over to West Papua and they were not listening, so this is what we get,” Dr Esorom said.

Meanwhile, the PNG government has banned flights from India, accusing the Indian government of producing deceitful test results for travellers.

The Kiribati Government announced it has received sufficient vaccines to inoculate its entire eligible population, following the arrival of 90,000 Sinopharm vaccines from China. These doses come on top of 52,000 from Japan, 48,000 through COVID-19 Vaccines Global Access, and 14,000 from Australia.

Despite this, the Kiribati Government extended its border closure until 31 December. Meanwhile 36,800 vaccines have arrived in Tonga from Japan. The Tongan islands of Tongatapu and ‘Eua have recorded double vaccination rates above 50 per cent.

A group of Tongans stranded in Fiji since Tonga closed its border in March say they feel abandoned by their government. The group has plead with Tongan officials to allow them to return home, questioning why Chinese workers were allowed to enter the country to work on government projects, while their appeals for repatriation have been refused.

The Pacific Islands Chiefs of Police Executive Director Glyn Rowland said this fortnight that the COVID-19 pandemic could be making recruitment of drug traffickers easier.

Briefly, traders have praised the Fiji Government’s $360 unemployment payment, saying it has boosted business transactions, while in Vanuatu there are plans to shift to a process of in-country quarantine for seasonal workers.

Doctors in Australia say remote video training could be the future of healthcare in the Pacific.

Finally, Vanuatu has provided Fiji with a US$89,000 donation in light of its COVID-19 outbreak, and Niue’s Chamber of Commerce President said the pandemic has highlighted the need to broaden the economy.