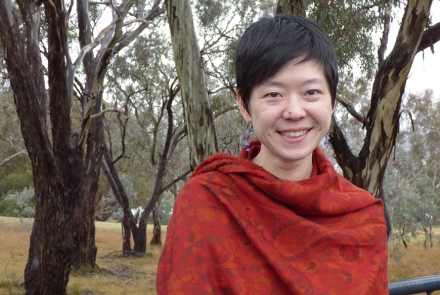 To mark International Women’s Day this year we are celebrating some of the professional and academic staff who make Crawford School Asia and the Pacific’s leading public policy school.

In this piece, we chat to Dr Joyce Wu, Research Fellow at Crawford School.

What inspired you to get into your field of research and why?

My background has always been in gender-based violence. I worked for a while as a domestic violence counsellor at a time when there was a growing interest in involving men in combating violence against women, and I became interested in this idea. There’s a theory that it’s a good idea to encourage men to become activists in the fight against gender-based violence, but in practice that doesn’t always work out.

Feminism and gender studies are always very hands-on applied – it’s very much about people’s experiences, particularly the poor the marginalised. I’m attracted to that because I feel that means I can actually make some change in the work that I do and be engaged with what’s happening.

Who is a woman in your field you look up to?

One person would definitely be my PhD supervisor, Professor Hilary Charlesworth, who works in international human rights law, particularly feminist law. Although she came from a different discipline to me, I have always been very impressed with how gracious and generous she is with everyone that she interacts with. She is an example of as someone who is constantly challenging power relations and her own privileges as an educated woman.

Another woman I have a lot of respect and admiration for is the Pakistani feminist Farida Shaheed. She was one of the key leads in protesting against the military dictatorship of General Zia-ul-Haq. He is infamous for pushing back a lot of the progress that Paksistan had made in terms of women’s rights. Farida Shaheed took a stand against that: she was extremely vocal about women’s rights, and took those domestic issues to the global stage.

What is a teaching/research project you are currently working on that motivates you?

I’ve been working on a book about addressing gender-based violence in post-conflict zones, with a focus on Afghanistan, Pakistan and East Timor. The book is interrogating how good intentions can become another form of benevolent patriarchy, where women are being told they need to be rescued by men. I thought it would be really interesting to look at how constant violence and conflict shape gender relations, whether that has an influence on how men perceive gender relations and particularly their role as men and anti-violence correspondents.

In my role as a Research Fellow at the Resource, Development & Environment Group, I’m also involved in research and teaching on gender and natural resource environment. I work with CSIRO, government partners and other research institutes to look at how to integrate gender into natural resource management. My previous work into male behaviours has given me a good understanding into how gender norms shape science as a discipline. Part of the aim of this work is to try and understand what are some of the norms and values that people have taken for granted as just pure science, but which are actually laden with social norms about gender.

What are you most proud of?

Certainly there’s a lot of pride in having a book published. But I think, it’s about teaching. It’s really rewarding when you’re working through a concept with students and you see that it suddenly goes “click” in their heads. Particularly in gender studies, both to see how female students gain confidence in critiquing patriarchy, but also seeing young men becoming more critical of masculinity.

What’s your advice to your younger self about choosing the right path and judging life’s demands?

Go with the flow. I know there are a lot of expectations about having a ten-year career plan and so on, but sometimes things happen quite by serendipity. You just have to be open to the different opportunities that are ahead of you.

Dr Wu’s book, Involving Men in Violence Against Women, will be launched through the ANU on May 7, 2018. Find out more.