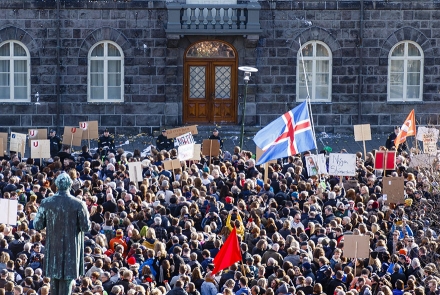 Podcast: The future of work
Insights from the 2018 Asian Development Outlook report

On the latest Policy Forum Pod, Crawford School’s Sharon Bessell and Martyn Pearce chat with Kristín Vala Ragnarsdóttir about Iceland, the Pirate Party, and some very big questions that go to the heart of the global economy.

What comes to mind when you think of Iceland? Maybe you think of sub-zero temperatures, a tiny population, and dramatic Arctic landscapes. Maybe, if you cast your mind back a few years, you think of Icelandic banks collapsing amidst the Global Financial Crisis, or mass protests following the Panama Papers scandal. But what might not come to mind is the role Iceland is playing in some very big global debates. These are debates on the world’s growing dissatisfaction with establishment politics, on global inequality, on impending environmental catastrophes, and on the need for new economic models for the 21st Century. This week on the Pod, we discuss all these issues and more with Kristín Vala Ragnarsdóttir. Oh, and did we mention there’ll be pirates? Listen here

Kristín Vala Ragnarsdóttir is Professor of Sustainability Science at the University of Iceland. She is Distinguished Fellow at the Schumacher Institute (UK), Vice-President of the Balaton Group, and Fellow of Academia Europeae, Norwegian Academy of Science and Letters, Icelandic Academy and the Royal Society of Arts and Commerce.

Iceland might be a small country, but in recent years it has found itself at the heart of some very big questions. The Global Financial Crisis hit Iceland worse than almost any country, leaving behind a collapsed economy and a wave of discontent towards the country’s political leaders.

In the years following the GFC, Iceland saw the rise of the Pirate Party – a type of grassroots politics standing for transparency and anti-corruption. And Professor Ragnarsdóttir was right at the heart of it.

“I actually remember the day I became a Pirate. That was when the left-Green then-Minister – in 2013 just when Parliament was collapsing – formulated the policy to get funding for setting up a heavy industry in his electorate…

“I thought, he’s from a ‘Green’ Party, and this is what he’s promoting? I thought I can’t vote for this party anymore, so I became a Pirate.”

The Pirate Party might be a distinctly Icelandic response to the financial disaster, but the sentiment that fuelled its rise has been felt around the world. And much of this is a response to growing levels of inequality, Professor Ragnarsdóttir says.

“A lot of people have realised that the financial system is not working for the middle man. We now have globally, I think it’s six individuals that own as much wealth as half of the poorer part of the population on Earth. It was a few hundred people who owned that much a few years ago.”

And as Ragnarsdóttir explains, rising inequality is only part of the problem with the world economy right now. Another issue is the unsustainable use of the Earth’s resources.

“We are coming to a peak of natural resources that can fuel this economic growth, and we will have societal decline because of pollution and resource depletion… If we don’t want to steer the world into 4 or 5 degrees of heating, then we need to change the economy.”

The solution is for the world to accept that a new economic model is needed. And there are no shortage of ideas out there. From the Sufficiency Economy to the Wisdom Economy, people like Kristín Vala Ragnarsdóttir are at the forefront of developing new ways to think about economic and human development.

“If I had a magic wand, I would make every government and parliament sit down and learn about new economics.”

Policy Forum Pod is available on Spotify, iTunes, Stitcher, and wherever you get your podcasts. Got feedback for us on this pod? Tweet us @APPSPolicyForum or find us on Facebook.

Filed under:
News, Opinion
Tags:
economics and finance, trade and industry, science and technology, social policy, ANU College of Asia and the Pacific