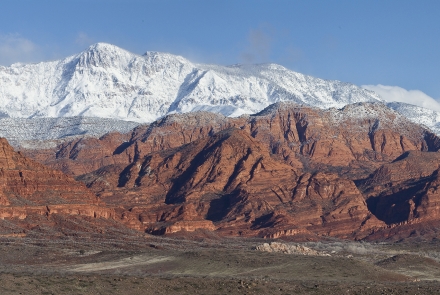 Trump and climate
A dampener to the global climate change effort, but new leadership opportunities emerge.

The Australian National University (ANU) is taking a lead role in preparing the next international climate assessment, which will be vital in informing nations about the need to strengthen their actions in order to avoid dangerous global warming. The Intergovernmental Panel on Climate Change (IPCC) has appointed three ANU climate experts – Crawford School’s Professor Frank Jotzo, Professor Xuemei Bai and Dr Kathryn Bowen – as lead authors for the Sixth Assessment Report, which will be published in 2022.

The report will guide the first full global stocktake in 2023, when all nations will decide on new or enhanced actions needed to achieve the Paris Agreement’s climate goals, primarily keeping temperature rises below 2 degrees Celsius above pre-industrial levels. Professor Mark Howden, ANU Climate Change Institute Director, said the appointment of the three ANU academics and 37 other Australian scientists was a testament to Australia’s research strength in climate change.

“It is particularly pleasing to see improved gender balance, with women now being 40 per cent of the Australians in the author teams – a significant increase compared with the previous IPCC report,” said Professor Howden, who is the Vice Chair of the IPCC Working Group 2 representing Australia and many other countries in the region. “Countries around the world are increasingly experiencing the effects of extreme weather, and the IPCC’s work is vital to address this and many other problems linked to human-caused climate change.”

Last year, more than 1,000 people died and 45 million people lost homes, livelihoods and services when unprecedented severe floods hit Southeast Asia. By 2030, millions of people and trillions of dollars of infrastructure globally will be at risk from flooding, drought, wildfires and other natural disasters. The IPCC has invited 721 experts from 90 countries to participate in the Sixth Assessment Report as coordinating lead authors, lead authors and review editors. Professor Frank Jotzo from Crawford School is the lead author for Chapter 13 on National and sub-national policies and institutions in the Working Group 3 Assessment of mitigation.

Professor Xuemei Bai from the ANU Fenner School of Environment and Society is the lead author for Chapter 8 on Urban systems and other settlements in the Working Group 3 Assessment of mitigation.

Dr Kathryn Bowen from the ANU Research School of Population Health is the lead author for Chapter 7 on Health, wellbeing and the changing structure of communities in the Working Group 2 Assessment of impacts and adaptation. “Increasingly, the IPCC Reports are being used by state, local and city government as well as industry to inform energy, infrastructure, health, environment and other policies and investments,” Professor Howden said.