Home » News and events » All stories » Trump and climate 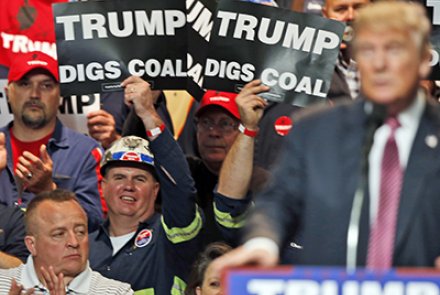 The US votes: Deplorables, Expendables and other ‘Nasties’
What does Trump's win mean for Trump voters?

The Trump Presidency is a fork in the road for climate action. While it may set back global climate efforts, an inward-looking US government that ignores climate change provides new opportunities for leadership elsewhere, Frank Jotzo writes.

Leadership in international climate policy: Paris, Beijing and beyond

Trump said he wants the United States to withdraw from the Paris Agreement on climate change. This would take four years, but just the announcement to walk away from the most comprehensive climate treaty, to date ratified by 111 countries, could have a big effect. The treaty is built on the idea of universal participation and mutual goodwill. And as Luke Kemp pointed out in a recent paper in Climate Policy, the Paris Agreement lacks provisions for dealing with countries that are not party to it.

The most obvious effect of a US withdrawal from Paris would be that any other government that is against action on climate change will have a convenient excuse to likewise renege on its pledges. There will be a chill effect on global climate policy, especially because the US leadership under Obama was crucial for achieving the Agreement.

But the chill may be more a brief cold snap than a prolonged winter. Initial reactions suggest that the large majority of the world’s governments remain committed to take action. They have choices. Some may take a wait-and-see approach; others may go ahead with their pledges as before; yet others might ramp up their ambition to cut emissions, filling the void created by the United States.

The proclamation for climate action from the Marrakech UN climate conference just concluded confirms that most countries find the momentum for a low carbon transition irreversible.

China is best placed to take on the global leadership role on climate change. As the largest global emitter and soon to be the largest economy, what China does has a stronger influence on global emissions than the actions of any other country. China has good reasons to modernise its industry and economy in a way that will cut its carbon output.

And China’s aspirations for global leadership in the low-carbon technologies of the future are helped if the US administration removes itself from the race.

The China-US agreement fundamentally paved the way for the Paris Agreement. It would be logical for China to take on the leadership mantle, in cooperation with or in parallel to some developed countries as well as some of the large industrialising countries. To what extent China will take the running on global climate policy is a defining question in the Trump era.

For the United States, the biggest effects are set to be on domestic energy and environmental policy. Trump has vowed to push for more oil and gas production in America. He has said his administration will abolish environmental regulations, this could include scrapping Obama’s Clean Power Plan which aims to cut emissions from electricity production. Federal mandates for energy efficiency and support for renewables could also be on the chopping block.

Trump has also vowed to support the US coal industry, but it is difficult to see a big resurgence of coal. US coal production fell by about a quarter over the last eight years. Scrapping the power sector regulations would tend to extend the life of existing coal-fired power plants, but for new-builds the alternatives – gas and renewables – are more cost competitive in many places, and attractive because they improve air quality.

On top of this, some US States have their own climate policy measures and are likely to continue, or perhaps even strengthen, these. California leads the charge with its emissions trading scheme and on many other measures, the government of the world’s sixth largest economy seems unperturbed by Trump. Expect other US states to continue doing their own thing too.

If under Trump there will be no federal policies to reign in carbon emissions, and no effort to comply with the national emissions target, then this likely will provoke reactions. In Europe, some are talking about carbon import tariffs on US goods to make up for the lack of emissions constraints on US industries.

So-called ‘border tax adjustments’ are not only a way to achieve equal treatment of industries for carbon costs but a populist approach that is also in the interest of specific domestic industry lobbies. They harm the economy by suppressing trade. It seems far-fetched that President Trump would put domestic climate policy measures in place just to avoid Europe levying border tariffs. In any case, Trump apparently intends to put up trade barriers to imports from some industrialising countries, which could easily bring retaliatory import tariffs, to the disadvantage of all concerned.

Border taxes could, of course, be applied to other countries, including developing countries that export emissions-intensive goods. But the hope that this threat would encourage more stringent carbon policies in the exporting countries has to be weighed against the economic costs of distorting trade, and a possible political backlash. The international climate regime has evolved to a system based on cooperation and voluntary pledges, and this has found its expression in the Paris Agreement. A coercive approach could backfire.

Business gets the low-carbon transition

Increasingly it is the global business community that drives climate change action. Major companies and investors accept that the transition to a low-carbon world economy must happen and will happen. And they are looking for ways to position their business for that transition.

Already, global economic growth is effectively decoupled from carbon emissions. Over the last three years, global GDP growth averaged over three per cent per year, while global carbon dioxide emissions increased by around half a per cent per year. During the preceding decade, the ratio was almost one-to-one.

The key is structural change to less materially-intensive economic activity; improvements in technical energy efficiency; and increasingly, a reduction in the carbon intensity of energy supply, made possible by improvements in zero-carbon technologies. These drivers of decarbonization still have a long way to go. And pursuing them is compatible with maximising economic growth.

Trump will not be able to suppress clean energy innovation. The case for the low-emissions energy system of the future is compelling even without government pushing for climate change outcomes – because it promises greater energy security, less local pollution, and ultimately a better product to consumers. Tesla, to use but one example, will not stop building better cars and developing cheaper batteries just because Trump got elected. The downward trend in costs of solar cells will continue regardless of who US federal policies.

The Trump Presidency could throw global climate action back, but at the same time spur it on in many countries. It is a fork in the road. An inward-looking United States with a government that ignores climate change provides new opportunities for leadership elsewhere.

In Australia, the opportunities are there to harness large amounts of renewable energy, and to build industries that will thrive in a low-carbon world.

If anything, less action in the United States increases the opportunities for Australia to take a leadership on some aspects of a low-carbon economy.