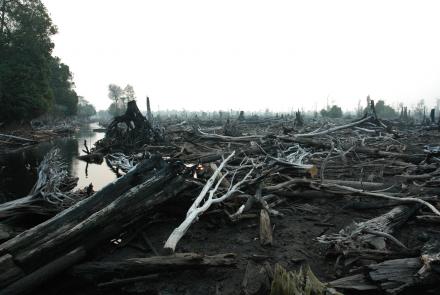 Climate change project gets the axe

A leading expert on land management has expressed his disappointment about a decision to pull the pin on a large Australian-funded project in Indonesia that aimed to help reduce carbon emissions by reforesting and rehabilitating peatlands.

Professor Luca Tacconi of the Asia Pacific Network for Environmental Governance at Crawford School told ABC’s The World Today program he was surprised by the decision.

“My impression would be from talking to various people that it’s perhaps a political decision, because, somehow, it was seen as an unsuccessful project, from the outside at least,” he said.

Tacconi said that in this case appearances didn’t match the reality and in his opinion, the AusAID-funded project hasn’t necessarily been a failure.

“They have done a lot of work on both the more scientific side, in terms of looking at peatland science, on the engineering side about how to re-flood the peatlands and also on the social and economic side, in terms of how to involve communities,” he said.

He added that Indonesia remains committed to rehydrating the peatland.

“My understanding from talking to colleagues in Indonesia government, is that they had asked Australia to continue the project.

“From what I understand, they thought that good progress had been made in terms of actually getting to the point where the practical outcomes could be seen in the field,” he said.