Home » News and events » All stories » COVID-19 suppression in Buenos Aires: Five factors at work in the World’s Longest Lockdown 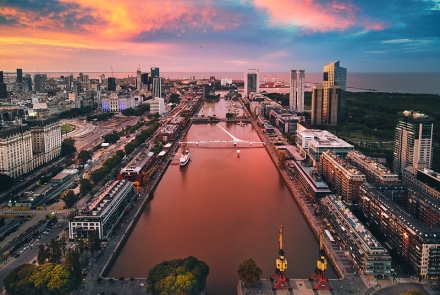 Hayley Henderson is a Postdoctoral Fellow at the Crawford School of Public Policy. Her research is focused on collaboration in urban policymaking and governance, as well as the kinds of alliances created outside of government and their actions that sway public policy, from feminist social movements to coordinated business lobbying.

Buenos Aires has fared better than most Latin American megacities in terms of COVID-19 health outcomes. In July 2020, the city proper within the Metropolitan Region of Buenos Aires (MRBA) had the highest mortality rate in the country at approximately 150 people per 100,000, which is less than half the rate of other megacities in Peru, Brazil and Mexico. This article describes five distinguishing features of the Buenos Aires experience, which has been labelled as world-leading by some analysts. Specifically, this article describes the fragile though to date helpful combination of reduced inequality, lower rates of poverty and greater preparedness of public health services compared to other Latin American contexts, combined with a coordinated response between governments and the vital work of social organisations in a “15-minute city.”

One important factor that drives transmission everywhere is whether people can (afford to) stay home from work if needed. Income inequality is lowest in Argentina (together with Uruguay they have a Gini Coefficient of 0.39) and central government social spending is higher than average in the region, including offering unemployment benefits to some people who lose work (one of only six countries in the region to do so) (ECLAC, 2018). Additional measures introduced during the pandemic for unemployed persons, casuals and workers in the informal economy include support payments to stay at home, enabling a higher proportion of the population to isolate relative to other parts of the region.

While inequality and poverty have exposed many vulnerabilities in Buenos Aires, especially for households living in informal settlements (approximately 10% of the metropolitan region’s population), the urban poor were in a comparatively more resilient position at the outset of the pandemic relative to most other megacities in the region. For example, there is a lower prevalence of potential comorbidities like malnutrition and tuberculosis; wider coverage of basic sanitation infrastructure as well as social protection mechanisms, such as price caps on essential comestibles and pharmaceuticals. Furthermore, expenditure on health as a proportion of GDP is higher in Argentina at 9.12%, compared to some of its regional counterparts, like Mexico (5.52%) or Peru (5%) (World Bank, 2017), where basic health services more regularly reach those in need.

With a view to supress viral transmission and mitigate the worse effects of COVID-19, there has been an interventionist and coordinated approach to managing the crisis between all levels of government (national, provincial, and local) with a focus on vulnerable groups. Working groups operate between levels of government on sectoral issues, from health to the economy, and the Mayor, Governor and President hold a fortnightly joint press conference to communicate updates and any new restrictions or relaxations to be introduced. Bipartisan leadership coupled with clear messaging has bolstered public trust and compliance in respecting the restrictions introduced, including the strict limit on movement: between mid-March and mid-July all residents were expected to stay home except to buy food or pharmaceuticals in their neighbourhood (essential workers were exempt).

While the wide-reaching restrictions did not eliminate the virus, nor even flatten the curve by July, they bought time to prepare and respond. The health system has been strengthened, including with the design and deployment of tests, for more respirators to be manufactured and distributed, for convention centres and hotels to be turned into isolation centres, to build emergency hospitals and to double the number of ICU beds in the metropolitan region. Additional social protection mechanisms have been implemented with relatively wide community support, such as the prohibition of rental evictions and obligatory mask wearing in public. Governments have also provided some economic relief with wage subsidies, financial support for SMEs, and stimulus programs (e.g. public housing and infrastructure development). The current strategy prioritises public health outcomes, though has produced at least short-term economic costs. However, as the Australian Ambassador to Argentina, Paraguay and Uruguay suggested, this prioritisation of health outcomes might support faster economic recovery in Argentina relative to most other countries in the region; In some forums, possible opportunities for economic engagement with Argentina post-COVID-19 are being explored (e.g. see ANCLAS, ANU moderated event on economic links between Australia and Argentina).

Despite strong government intervention, not enough help is reaching those in greatest need, especially households in informal settlements. This reflects the fact that State capacity remains weak relative to the immense challenge of redressing poverty. For example, only around 50% of households are connected to networked sewerage infrastructure in the MRBA and the abovementioned subsidies have not reached all households in need, forcing some people to work despite associated risks. Instead, responses are often provided by social organisations to meet the basic needs of many households, from providing meals and masks to fixing houses and local drainage. As one representative from the women’s group Belleza y Felicidad Villa Fiorito in outer Buenos Aires explains, in these contexts it often comes down to “the poor helping the poor.” The work of many social organisations has also been directed towards community organising, making visible the often naturalised aspects of poverty in the city and new ways of pursuing cities based on an ethic of care.
An additional factor has acted to constructively bind together the preconditions of lower inequality and poverty rates together with the actions of governments and social organisations: the “15-minute city”. Residents of the City of Buenos Aires and in some parts of the outer metropolitan area have been able to source essentials like food and pharmaceuticals within a short walk from their homes and are well connected to health facilities. This has facilitated suppression by encouraging neighbourhood containment.

Some commentators have argued that COVID-19 has exposed weaknesses in cities because they are too big and too dense. However, it is unlikely that cities’ populations will decline in favour of a small and medium city revival. The experience of Buenos Aires as one of the largest and densest cities in the region with a coordinated, strong State response and an active civil society has proven effective in managing a strict lockdown with relatively better health outcomes compared to the region. The experience also shows that the Achilles heel in facing crises is inequality, and that the pathway to recovery should rest on, as many social organisations argue, an ethic of care and redistributive measures that eliminate marginalisation.