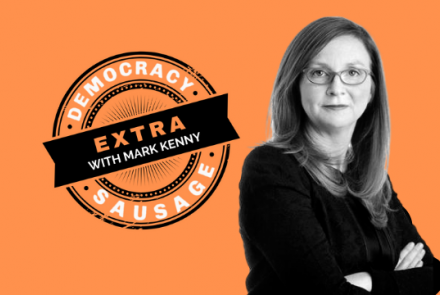 Once an outsider to win the last Australian federal election, Scott Morrison’s ‘miracle’ 2019 electoral victory put him at the helm during one of the most difficult years in the country’s contemporary history. So what has the COVID-19 crisis revealed about the prime minister, as well as Australian politics and society? Recorded live as part of the ANU/Canberra Times Meet the Author series, Guardian Australia’s political editor Katharine Murphy joins Mark Kenny on this Democracy Sausage Extra to discuss Scott Morrison, pandemic politics, and her new Quarterly Essay, The end of certainty.

Katharine Murphy is Guardian Australia‘s political editor. She has worked in Canberra’s parliamentary gallery for 15 years. In 2008, she won the Paul Lyneham award for excellence in press gallery journalism, while in 2012 she was a Walkley award finalist in the best digital journalism category. She is the presenter of The Guardian’s Australian Politics Live podcast and recently authored a Quaretrely Essay, The End of Certainty: Scott Morrison and Pandemic Politics.