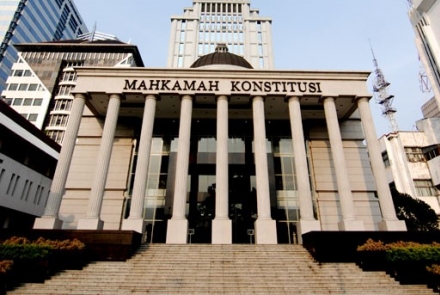 Photo by Wsaragih on Wikimedia Commons

COVID-19 and the urgency of constitutional complaint in Indonesia

Implications of the Biden presidency for the Pacific Island region

Plenty of evidence has been put forward to underscore Indonesia’s chronic governance problem in handling the COVID-19 crisis. From irresponsiveness and denial when the global outbreak initially started, to miscoordination among government institutions at different levels and lack of transparency and openness, even hostility towards dissenting voices and public criticisms, when the outbreak finally hits the country and spread nationwide.

What is often overlooked in the discourses on the state’s response to COVID-19, however, is the role of the judiciary to correct or amend policy failures or governance problems. As part of the broader wave of democratization, the world has experienced what scholars call the ‘judicialization of politics’, or the increasing role that courts and the judiciary in addressing public policy, governance, and political matters of pressing concerns.

The role of courts, in particular constitutional court, becomes ever more important against the background of the COVID-19 crisis as we try to answer one pressing question: what constitutional legal recourse exists for the public to account for government’s policies in responding to the pandemic that have negatively impacted their lives?

Some parties from small and medium enterprise groups have already taken legal action by filing a class action lawsuit against the government. Such legal mechanism, however, offers partial, targeted remedy towards only the parties concerned in the form of financial compensation. It is not the appropriate venue to seek political remedy or significant changes to the substance of the policy that have universal implications.

Meanwhile, though judicial review to the Indonesian Constitutional Court (Mahkamah Konstitusi or ‘MK’) exists as an appropriate legal channel for citizens to protect their constitutional rights, it is limited to the review of the constitutionality of national laws. It cannot be used to contest any decisions or actions that violate fundamental rights made by state apparatus.

Within this context, constitutional complaint needs to be adopted and embedded in the judicial power of MK.

The Importance of Constitutional Complaint

Constitutional complaint is be defined as a direct mechanism for citizens to lodge complaint to the constitutional court whenever they feel that their rights have been violated or neglected by the policies, decisions, or actions of state authorities.

In Indonesia, the some of the government’s policy responses toward COVID-19 pandemic have gone against various aspects of the constitutional rights of its citizens.

The failure of the government to provide proper protective equipment for medical personnels in a timely manner, which contributes in driving up the number of casualties of doctors and nurses, for example, stands in contravention to the rights to lives of citizens. This is governed under article 28A of Indonesia’s Constitution, which acknowledges the rights of every citizen to live and to defend his/her life and living whereas article 34 paragraph 4 even mandates the state to provide proper healthcare and public service facilities.

Another example is crackdowns by the police on those alleged to have defamed the President and public authority while expressing their discontent on the government’s handling of COVID-19. In doing so, the police acted in defiance of 2006 MK’s ruling that had revoked Indonesian Criminal Code articles related to defamation of President and public authority. As such, this crackdown clearly contravenes the Indonesian Constitution, which governs the right of every citizen to freely express his opinions.

The adoption of constitutional complaint shall thus reaffirm the absolute protection of rights of individual citizens in a democratic setting like Indonesia, which is guaranteed by the constitution and laws.

The adjudication of constitutional complaint by the Constitutional Court is not an entirely new concept to Indonesia. The idea was brought to the People’s Consultative Assembly (MPR) during the heyday of Indonesia’s constitutional amendment process though it did not gain traction for fear of overlapping with other judiciary functions and overstretching of power, among others.

In reality, however, it is rare that the establishment of a constitutional court in other countries is done without bestowing this power due to its essentiality in the protection of constitutional rights of citizens. Former Chief Justice Hamdan Zoelva even states that ever since its inception, MK has received many appeals, which are by nature constitutional complaint cases that it was forced to not accept for lacking the power.

A chance to do so actually emerged when civil society elements made an appeal to the Court through case No. 28/PUU-XVII/2019 to interpret its power as contained in relevant laws as to include the power to adjudicate constitutional complaint. Unfortunately, the Court declared the case not acceptable.

It thus falls on the Constitutional Court now whether to exercise its constitutional power and finally assume this important mandate for the greater public good. In conjunction with this, will the Indonesian Constitutional Court continue to be a ‘judicial activist’, playing a proactive role in the deepening of democracy and rule of law as political scholar Bjoern Dressel maintains, or will it gradually disrobe its ‘heroic’ mantle as legal scholar Stefanus Hendrianto opines?