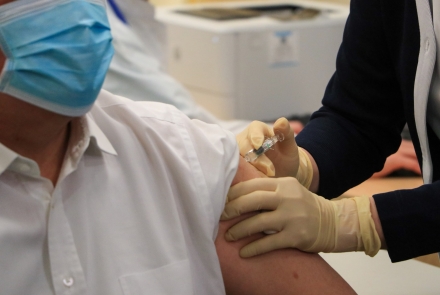 The world has now reached the grim milestone of about 160 million total confirmed cases of COVID-19. More than 20 million cases have been reported by India, which has been devastated by a second wave driven by the premature relaxation of public health measures and more transmissible variants of the virus.

Even some countries with high vaccination rates haven’t been spared. Chile is battling a new wave of infections despite more than one third of its population being fully vaccinated, mostly with CoronaVac.

By comparison, Israel is now only carefully easing restrictions, despite having fully vaccinated 56 per cent of its population, and given at least one dose to 60 per cent, with the high-efficacy Pfizer vaccine. So far, Israel’s world-leading vaccination strategy and cautious reopening of its economy has avoided a renewed surge in cases.

The lessons for Australia are obvious. The country won’t be truly safe until we’ve reached herd immunity. Reaching this threshold ensures an outbreak won’t spread rapidly in the community and lead to an epidemic. It also protects the millions of Australians who can’t be vaccinated due to medical reasons, or aren’t currently eligible for vaccination, such as children and adolescents.

To protect Australians, there are four key things policymakers must do.

First, they must strengthen the country’s quarantine system by acting on the latest evidence of the role of airborne transmission in quarantine breaches.

Third, Australia should not relax international border restrictions until everyone has had the opportunity to be vaccinated.

Fourth, the country should establish mass vaccination hubs in major centres to maximise the number of people who can be vaccinated each day, as Victoria is doing.

Australia needs to revise its strategy due to the emergence of more transmissible and more virulent variants, which have substantially changed who is at risk from COVID-19. Variants threaten both young and old, because they advance the age-related risk of hospitalisation by one to two decades. In other words, the risk for a 20 to 39-year-old is now similar to the risk previously faced by a 40 to 59-year-old.

Variants also markedly increase the likelihood of dying from COVID-19; the United Kingdom variant raises this risk by 64 per cent.

It’s been claimed the vaccines in Australia’s portfolio are 100 per cent effective at preventing severe illness and death, but that’s not supported by science. There were too few severe cases in the AstraZeneca trials to accurately assess this endpoint, and the estimated efficacy lies somewhere between 72 and 100 per cent for severe illness. In contrast, real world experience from Israel has shown the Pfizer vaccine is 97.5 per cent effective against severe disease, with a confidence interval of 97.1 to 97.8 per cent.

We’ve learned that death or full recovery aren’t the only outcomes of COVID-19, and this should also change our vaccination strategy. The United Kingdom Office for National Statistics reported that more than one in 10 people are left with persistent symptoms lasting at least 12 weeks. A United States study of over 70,000 people who had COVID-19, but weren’t unwell enough to be hospitalised, found that many survivors were left with substantial chronic health problems.

This syndrome, now known as long COVID, is estimated to affect over one million people living in the United Kingdom, and more than 400,000 of them experience limitation in their daily activities because of it. The syndrome affects young and old alike, and there is growing evidence of children with long COVID. Australia’s vaccination strategy must, therefore, also aim to prevent long COVID, and we stand the best chance of doing it with high-efficacy vaccines.

Australia has ordered 40 million doses of the Pfizer vaccine and 51 million doses of Novavax, more than enough to vaccinate the entire population with these highly effective vaccines. But Australia is persisting with the rollout of the AstraZeneca vaccine and has, by default, imposed AstraZeneca as the only vaccine for almost all of those 50 years of age and older because those under 50 years have priority over the limited supplies of Pfizer.

This is inequitable because it knowingly gives older people, who face a higher risk of severe disease and death from COVID-19, a less effective vaccine. It also runs the risk of creating a situation where the South African variant could spread in Australia’s older population should border controls be relaxed or if an outbreak should occur.

The South African Government abandoned their rollout of the AstraZeneca vaccine. Denmark stopped using AstraZeneca in April. Seychelles, which has fully vaccinated the highest proportion of its population than any country at 61 per cent – 40 per cent of the total population with a version of the AstraZeneca vaccine made under license in India – is now facing a surge of cases in which the South African variant appears to be playing a role. New Zealand changed its vaccination rollout in March and is now using Pfizer exclusively because of its higher efficacy over AstraZeneca.

In justifying its decision, ATAGI compared the risks of severe blood clots with the risk of intensive care unit admission due to COVID-19 by age group under two scenarios over the next 16 weeks. In scenario one, Australia suffers another outbreak equivalent to its first wave – approximately 7,000 cases and 100 deaths – and COVID-19 risks then exceed blood clot risks for those 50 years and over but not for those under 50. In scenario two, Australia suffers a Victorian-like outbreak, with around 20,000 cases and 800 deaths, and COVID-19 risks exceed blood clot risks for all age groups.

The ATAGI recommendation is sensitive to assumptions about risks of both COVID-19 and blood clots. The European Medicines Agency recently doubled its estimate of the risk of blood clots for older people since ATAGI carried out its original analysis and this probability – one in 100,000 – is similar to the blood clotting risk experienced with AstraZeneca in older Australians to date. Critically, if the ATAGI had used the revised and higher estimates of blood clot risks, and its scenario one COVID-19 outbreak, it would have also recommended against AstraZeneca for those aged between 50 and 60.

Australia last major COVID-19 outbreak ended in October 2020. Small outbreaks from hotel quarantine have necessitated short lockdowns, contact tracing, and self-quarantine measures, which have succeeded so far. But an outbreak of the kind assumed by ATAGI would cause multiple fatalities and require a severe and prolonged lockdown that would cost the domestic economy tens of billions of dollars.

Vaccine hesitancy towards the AstraZeneca vaccine has increased in the 50 and older age group since the new policy was announced last month. It seems that many Australians have done their own risk assessment, and concluded, based on the track record of the last six months, that the risk of infection and hospitalisation is much lower than the risk of blood clots.

Given its inferior efficacy and the risk of blood clots, the continued rollout of AstraZeneca can only be justified as an emergency measure to prevent an imminent third wave before Pfizer and Novavax doses are delivered to all Australians. However, if Australians genuinely face a high risk of a third wave, they should be told because this would help overcome vaccine hesitancy toward AstraZeneca.

Further, if a third wave is imminent, governments should also be doing everything in their power to avoid a major outbreak. This would include: strengthening border controls by constructing or extending purpose-built air-gapped quarantine facilities, such as at Howard Springs; building mass vaccination hubs in all major centres; and promoting continued cost-effective social distancing measures, such as wearing masks on public transport, and not allowing large public events.

If AstraZeneca is being used as an emergency stop-gap measure, as implied by the ATAGI risk-benefit probabilities, then people aged 50 years and over should be prioritised to get Pfizer as they have a higher risk of developing severe COVID-19 than those under 50 years of age. Further, it is almost certain that people will need to be revaccinated periodically as new variants of concern are identified, much like the annual flu jab. This is possible with the Pfizer, Moderna, and Novavax vaccines but can’t be done with AstraZeneca, because people develop immunity to the adenovirus vector, making successive doses less effective.

The Australian Government must reassure the public that the emergency use of AstraZeneca for those 50 years and over is necessary under current border controls and is not being imposed to allow earlier reopening of international borders. Crucially, an AstraZeneca only vaccination strategy for those aged 50 and over will not provide the level of protection necessary to safely relax border controls, nor will it deliver herd immunity.

While there are low-cost border controls available such as rapid testing on arrival, vaccination passports, and self-isolation, there are serious deficiencies with each. Notably, there is a much larger proportion of false negatives with rapid testing, there is an increasing black market for false vaccination certificates, and home self-isolation is not nearly as effective as supervised quarantine at reducing growth in infections. Moreover, those vaccinated with AstraZeneca may still be infectious with the South African variant because of its low efficacy for that variant and some fully vaccinated travellers can still be infectious.

A three-to-six month delay in reopening the international border until everyone can be vaccinated with Pfizer or Novavax would impose a burden on the economy of around $6-12 billion. This cost, however, is much less than a prolonged lockdown needed to control a major outbreak, or the costs associated with an increased frequency of short and long-term city lockdowns should the international border reopen under the current vaccination rollout.

Australia’s vaccination strategy must change as the facts change. Herd immunity is the only way to eliminate community transmission for good and to avoid costly lockdowns. This can be achieved with a Pfizer or Pfizer-Novavax vaccination strategy, but not with the country’s current approach because it will be impossible to achieve herd immunity against several of the world’s most concerning variants using AstraZeneca.

With the emergence of more transmissible new variants, Australia’s current COVID-19 vaccination strategy doesn’t make sense from either a public health or an economic perspective. It must change or Australia risks a future epidemic and/or very large costs from lockdowns when its international border reopens.

The information provided in this article does not substitute for, nor does it replace formal medical advice in relation to individual COVID-19 vaccinations. In all cases, anyone deciding to be vaccinated, when, and with what vaccine, should first consult with their GP.