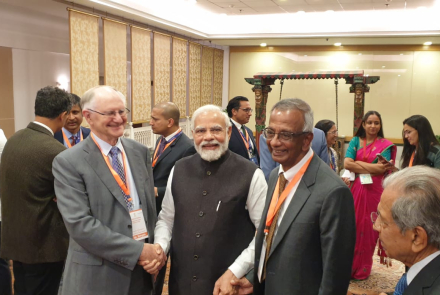 Emeritus Professor Peter Drysdale has recently returned from Delhi, where he attended the Kautilya Economic Conclave as well as meetings with leading academics, policymakers, and politicians, including Prime Minister Narendra Modi.

Professor Drysdale, who is also Editor-in-Chief of East Asia Forum and who was the intellectual architect of the Asia-Pacific Economic Cooperation (APEC), spoke of the opportunities ahead for India.

“India confronts historic policy choices in its ambitions to become a great power and as a stabilising force in global geopolitics today,” he said.

The inaugural Kautilya Economic Conclave, a high-level policy-focused conference of prominent researchers of the Indian economy and regional trade, was sponsored and organised by the Indian Ministry of Finance and public policy think tank NITI Aayog.

Professor Drysdale presented a paper on the prospects of export-led growth in India, bringing to bear the lessons for India from the East Asian growth story. He also contributed to discussions of the welfare state after COVID-19.

“While India is hedging its relations with China and moving towards the United States in an Indo-Pacific frame, its ambition is for status in a multipolar world. But it faces a huge economic challenge that requires opening the Indian economy to trade and investment to develop a strong manufacturing sector capable of absorbing India’s large and growing labour force. East Asian incomes are eight times bigger than South Asia incomes, the ratio is similar for trade and twelve times for investment. If China stopped growing tomorrow, and India doubled its income every decade, it would not catch up to China until 2050 or thereabouts,” said Professor Drysdale

“India’s withdrawal from The Regional Comprehensive Economic Partnership (RCEP), which took force in early 2022, was a step in the wrong direction, and while it is unlikely to re-enter the agreement, the RCEP framework is open and India should accept invitations to participate in RCEP ministerial meetings and engage in RCEP processes where possible,” he said.

These collaborative research efforts will contribute to the follow-through of the key points of discussion during the Kautilya Economic Conclave, ultimately contributing to the future direction of India’s development.