Home » News and events » All stories » Preserving the past 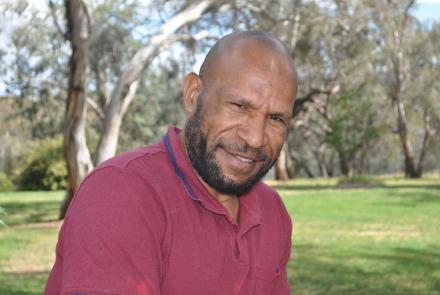 Bolkin had a passion for writing from a young age. As a child he would spend his days reading short stories that gave him the inspiration to one day write a book of his own.

In 2002 he began the journey of writing his first book. Over a course of 10 years he spent time trekking through the rugged mountainous terrain of his traditional homeland of Simbu, situated in the central highlands of Papua New Guinea. During that time he spoke with more than 30 villagers from six different tribes. He would take the tribespeople tinned goods in exchange for their invaluable stories and experiences.

His goal was to preserve the memories of the past and give the Galkope people a chance to understand where they are from and the history of their land. The result is the recently published, The Flight of Galkope.

“When I was a young kid I read short stories written by Papua New Guineans who went to university in PNG which gave me motivation. Then when I was in high school I read books by African writers about their traditions that gave me enthusiasm to write something about my people.

“I spoke to old men and women from the Galkope tribes and learnt many things I didn’t know about PNG prior to the arrival of Christianity. Speaking to the old missionaries and Australians that went to Simbu I heard about their experiences of meeting new cultures and their feelings towards the process of proselytation,” he said.

Bolkin said that he hopes The Flight of Galkope can help preserve some of the history in PNG and to influence others to hold onto the positive parts of PNG culture.

“The knowledge of PNG culture and history is disappearing so I wanted to write something so the future generations can read about it to know how we used to do things.

“Some things from PNG, like witchcraft and tribal fights, are bad and we need to disregard these things but there are things that I’ve written about that we need to hold on to. If we bring good things in from the Western countries and combine them with the good things in PNG then I think we can become a decent society.

“I want to inform policymakers that there are some good things we need to keep.”

Bolkin said that writing the book took a long time and he made many sacrifices.

“It takes discipline and I missed out on a social life for a long time. It was tough to tell people that you couldn’t socialise, especially in PNG culture.”

But he said the sacrifices were worth it and he’s already begun his next venture.

“I’m already writing another book. It’s titled The Woman’s Child and as soon as The Flight of Galkope has been launched I will focus on finishing it. I hope to have it published in 2014.”

Bolkin said he wants to inspire others to share their stories and continue to learn about where they’re from and the world they live in.

“Papua New Guineans have so much to write about. We have 850 nations and there are so many languages. We have stories from the mountains to the oceans and the islands. There’s so much information from our lands and we need to open the information bank and write as much as we can to share our stories with our people and the world.”

Kela Kapkora Sil Bolkin is studying a graduate diploma and working towards his masters degree in Crawford School’s Policy and Governance program.

Join Mr Bolkin for the launch of his book at 3pm, Wednesday 27 November. The book will be launched at the PNG High Commission in Canberra.

For more information and to register for the book launch: https://crawford.anu.edu.au/events/3160/book-launch-flight-galkope