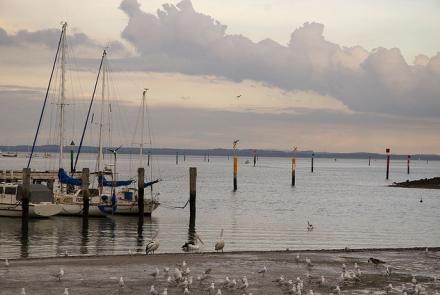 Image of Westernport Bay by John Benwell on flickr.

Podcast: From Southeast Asia to Eden-Monaro

A special Crawford School project is working with local residents of Westernport Bay in Victoria to plan the future of the region. The Victorian Government is proposing a major mega-container ship port for Westernport Bay, but residents wanted to see alternatives.

Speaking exclusively to the Crawford Conversation podcast series, Crawford’s ANU Chair in Public Policy, Professor Bob Costanza talked about a recent workshop on Phillip Island that brought together 75 participants representing 40 organisations to develop four different scenarios for the region in 2040.

“Scenario planning is based on the idea of coming up with plausible alternative futures that cover a range of possibilities for an area.

“They’re not predictions of what is going to happen, they’re possibilities that we need to choose from. It’s a way for people to think about the future and the kind of future they really want,” said Costanza.

“The first of these - the ‘Westernfreeport’ scenario - considers the region, world and nation will continue to pursue conventional economic growth ideas. The ‘Lagom’ scenario considers the nation, region and the world as pursuing more sustainable development goals.

“With the ‘Creative Growth’ scenario - there’s still an emphasis on economic growth in the conventional way at the local level, but it’s had to be more creative to fit in the context of sustainable development goals at the national and global levels,” said Costanza.

“The other alternative is where the nation and the world continues down the conventional development path, but the region decides that they want to implement sustainable development goals. That scenario is called the ‘Beacon’ scenario - where they become a beacon of sustainability.”

Costanza said while the workshop developed the four scenarios, the hard work was only just beginning.

“We want to know what people think about these scenarios, how do they rank them and how they would feel living in these different futures. We want to get the conversation going with the population about what kind of future they really want.

“The essence of a democratic society is to have a discussion about the kind of world we want. We tend to focus on the details of how to get there, without having developed a shared vision of where it is we really want to go.

“As, Yogi Berra once said, “if you don’t know where you’re going, you end up somewhere else,” said Costanza.

Are you interested in these ideas? Bob Costanza teaches Special Topics in Environmental Management and Development (EMDV8041).

You can listen to the audio interview on Crawford Conversation here.

To participate in the survey and vote on the scenario you think would be best for the region, click here.