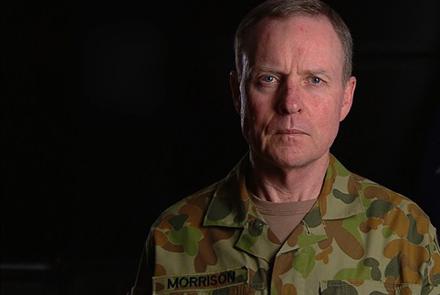 In a recent address at Crawford School’s National Security College, the Chief of Army outlined a vision for gender equality in Australia’s military.

“I am certain of this: we live in a world where, increasingly, the squandering of women’s talent, the traducing of their potential, is a global disgrace,” he said at the inaugural Women in National Security forum.
“By every credible measure, women are denied opportunities that are accorded to men as a birthright of their sex. At home they face levels of domestic violence that imperil their very being. Women face barriers, sometimes tangible, often subliminal, that constrain their lives and their contributions to the development of our world.”

Lieutenant General Morrison’s gender equality credentials are already well established. In June 2013 he delivered a YouTube message to the Australian Army that attracted over one million views and in June 2014 received further international acclaim for his closing address to the Global Summit to End Sexual Violence in Conflict.

He is a Male Champion of Change and a White Ribbon Ambassador. He argues that hierarchy can be a good structure and tool for driving cultural change.

The argument goes something like this: As in the post-war global order, hierarchy helps to establish and maintain norms and conventions. For a military, hierarchy is not only useful – it is critical to combat operations. It is also useful for implementing change because of the critical role of leadership in military culture.

“People don’t do things for your reasons, they only do them for theirs,” Lieutenant General Morrison said. “Messages, narratives, examples and leadership in a hierarchical organisation count greatly.

“We need men of authority and conscience to play their part and we most certainly need women, too long denied a strong enough voice, to be given opportunities to lead – in all endeavours, in all parts of our polity and society.”

Lieutenant General Morrison stated that the underlying military culture is highly responsive to strong leadership. Importantly however, changes must occur while maintaining a high standard of combat capability.

“How could we eliminate meaningless misogyny while still preserving a team ethos that could survive the heat of battle?” he asked. “The answer is in how you define yourself as a soldier and as an Army. It’s about culture – and it counts.”

“As Male Champions of Change, we agreed to disrupt the status quo within our organisations and for me that has centred on matters of the heart. You can have the best policy is the world, and we in the Army often do, but unless there is a strong emotional quotient, those policies will count for little.”

You can read the full text of Lieutenant General Morrison’s speech on the National Security College website.