Home » News and events » All stories » A vision projected 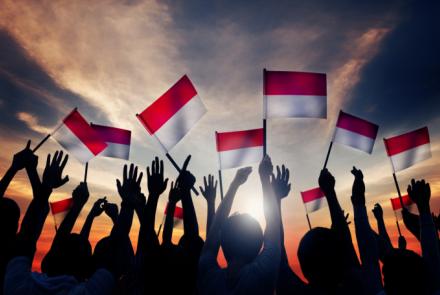 In July 1964, Sir John Crawford, director of what was then the university’s Research School of Pacific Studies, received a memorandum confidently titled ‘Indonesia Project’. Its author, Professor HW Arndt, head of economics in the school, wanted his department to adopt a strong research focus on Indonesia.

At the time, ANU had only limited expertise on Indonesia. In his memorandum, Arndt cited Indonesia’s importance to the region and to Australia, the absence at that time of scholarly studies of the Indonesian economy, and the practical consideration that research on Indonesia was less expensive than research on other locations such as the Indian subcontinent, China and Japan.

Yet if someone were looking for a good time to start a major research project on the Indonesian economy, they would be unlikely to choose the mid-1960s. Under then president Sukarno, the state budget was a state secret, economic data were difficult to obtain and of dubious reliability, and inflation was probably around 500 per cent.

And few would have thought of Arndt as the progenitor of such a project. An expert on the Australian banking system, Arndt had no known interest in Indonesia. He had yet even to travel there.

So why did Arndt take this initiative? Newly appointed to the department, he may have wanted it to take a new direction under his leadership. Or the focus on Indonesia might have been influenced by Crawford himself, who had attracted Arndt to the department in the first place. Crawford was certainly one of the first Australian academics to argue for a scholarly consideration of the country’s regional neighbours.

In any event, Crawford must have found Arndt’s arguments persuasive. By late 1965, what is now known as the ANU Indonesia Project was well under way. Two new academic staff, a research officer and two research assistants had arrived to work on Indonesia. A two-day seminar on Indonesia had been held, and two issues of a new Bulletin of Indonesian Economic Studies (BIES) published.

As soon as 1966, the department reported that BIES, initially an experiment, had become widely known among those interested in the Indonesian economy both in Australia and overseas. Published continuously since then, BIES is now a leading international journal in applied economics and area studies.

During the next 15 years, what had started out as a risky venture became remarkably well established, producing numerous books, chapters and papers and recruiting more staff members and postgraduate students. Five of these students—Peter McCawley, Anne Booth, Hal Hill, Chris Manning and Howard Dick—were to have significant influence on the Project, and on the study of the Indonesian economy. Conditions for studying the Indonesian economy had meanwhile become much more benign with the transition from Sukarno’s government to that of Soeharto.

When Arndt retired at the end of 1979, the Project’s leadership successfully transitioned to McCawley and then to Hill. Each put his own stamp on the Project, in the face of external pressures that at times threatened its continuation. Later, under Manning’s leadership, the Project survived the fallout from the 1997–98 Asian financial crisis, and the end of the Soeharto regime.

During these years of transition within the Project, its annual Indonesia Update conference, the first of which took place in 1983, grew in reputation. The Update is now the best-attended conference on Indonesian affairs held anywhere outside Indonesia, and probably inside Indonesia too. Recognising, perhaps, the value of this model, ANU now has Updates for many other Asia-Pacific countries.

In recent years, under the leadership of Manning and then, from 2011, of Budy Resosudarmo—the Project’s first Indonesian head, and the first not to be one of Arndt’s former students—the Project has held many more activities in Indonesia than ever before, and invariably in collaboration with Indonesian counterparts. Fifteen Indonesian PhDs have graduated under Project supervision since 2000, most returning to Indonesia to be part of the Project network there. Today, Indonesia and Indonesians are central to the Project’s life in ways they were not 20 years ago.

On 30 July 2015, the ANU Indonesia Project (together with BIES) will celebrate its 50th anniversary, making it one of the longest lasting research programs focused on a single country in Australia, and perhaps the world. Diplomatic relations with Indonesia have waxed and waned over the years, but the bilateral and international networks and collaborations that the Project represents have not just endured—they have matured and thrived.

The ANU Indonesia Project’s 50th anniversary events are scheduled throughout the week.

This article is based on a forthcoming book by the author, Colin Brown on the history of the ANU Indonesia Project.