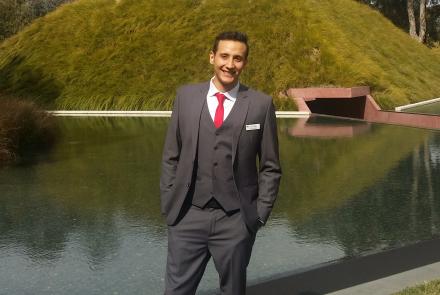 Discover how you can advance your career with a postgraduate qualification from Crawford School at the Graduate Studies Information Session on 18 November 2015.

Meet Amy Liu
Advisor to the Department of Labour in Myanmar.

Picturesque plazas, magnificent art-filled churches and a Unesco World Heritage Site packed with colonial monuments and architectural treasures – this is what Ivan Gonzalez left behind to study at Crawford School.

Ivan grew up in the tourism paradise that is Quito, Ecuador. Living his entire life in the beautiful 16th century city it was only the lure of a world-class education that tore him away.

He arrived in Australia to undertake the Master of International and Development Economics at Crawford School of Public Policy – which he will complete this year.

“Economics is my passion,” he said.

“I looked at a variety of universities to find a Master’s Degree that best suited what I wanted to study, and found that the Master of International and Development Economics at Crawford speaks directly to my passion.”

“It not only provides the strong economic theory and quantitative framework that I am looking for, but it explores real economic applications within business and government, with both local and global economic perspectives.”

Ivan came to Australia on the ‘Excellence Universities’ scholarship program of the Ecuadorian Government after spending several years working in economics roles in Ecuador.

The scholarships give distinguished Ecuadorian students the opportunity to study in the most prestigious universities in the world.

His experience at the (Ecuadorian) Secretariat of Planning and Development gave him the insight, experience and motivation he needed to pursue his Master’s Degree at Crawford.

“In my first experience as an independent economic consultant and entrepreneur I did a broad market research and financial project evaluation that determined the economic unviability of a venture capital investment in an Ecuadorian start-up company,” he said.

Ivan is extremely close to his family – naming his father as an inspiration and the most important figure in his life.

“My father is an exemplary human being. He has poor living conditions as a child, a broken home, and a dangerous living environment but it never stopped him from triumphing in life and becoming an exceptional father,” he said.

“He is the living example of self-improvement, because in spite of the problems he had, he managed to carry on with self-education, student leadership and complete all his studies with honours.”

It was his father’s encouragement and support that pushed Ivan to take the next step in his education and enrol in postgraduate studies at Crawford School – he even hit the genetic lottery.

“I am convinced that I have inherited my father’s analytic and abstract reasoning, critical-thinking skills, strong logical abilities, and the capacity to learn quickly,” he said.

He has been an Executive Member of the Crawford School Students’ Association (CSSA) since August 2014 and was recently elected as the CSSA President.

He also works with StudyCBR - a project of the ACT Government and has been a Student Ambassador since February 2015.

Ivan was recently awarded a Certificate of Appreciation for his outstanding contribution to the promotion of Canberra.

But it doesn’t stop there.

Last year he achieved the second runners-up prize for a research essay competition by the Agricultural and Resource Economics Society (AARES).

Ivan plans to spend the rest of his Masters enjoying some of the “curious” experiences of Australia.

“I absolutely love Australian Afternoon Tea and Earl-Grey Tea (with milk). It is such a novelty for any Latino to add milk,” he said.

He is also partial to some of Australia’s favourite TV snacks and our ‘jumpy’ national icon.

“I love Tim-Tams and Koala Caramel: the best “treats” in Australia – oh and I love kangaroos – just love em!”

But he could have much longer to enjoy the many delights of Australia.

“I have already submitted my application for a PhD in Economics - at Crawford of course!” he said.

“I am applying for a Tuition Fee Scholarship and a PhD Scholarship from ANU. Wish me good luck.”

Discover how you can advance your career with a postgraduate qualification from Crawford School at ANU Postgraduate Expo 8 September.